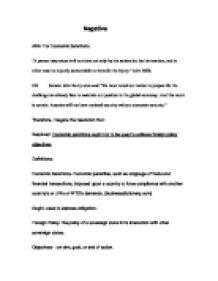 An analysis of why economic sanctions are good

Negative AKA: For Economic Sanctions "A person may cause evil to others not only by his actions but by his inaction, and in either case he is justly accountable to them for the injury." John Mills OR Senator John Kerry once said "We must retool our nation to prepare for the challenge we already face to maintain our position in the global economy. And this much is certain: America will not have national security without economic security." Therefore, I negate the resolution that: Resolved: Economic sanctions ought not to be used to achieve foreign policy objectives Definitions: Economic Sanctions- Economic penalties, such as stoppage of trade and financial transactions, imposed upon a country to force compliance with another country's or UN's or WTO's demands. (businessdictionary.com) Ought- used to express obligation. Foreign Policy- the policy of a sovereign state in its interaction with other sovereign states. Objectives- : an aim, goal, or end of action. (In case of argumentation relating to resolve not confined to U.S.A) Sovereign- one that exercises supreme authority within a limited sphere. All unspecified definitions are from Merriam Webster Core Value: Societal Welfare- What is best for most of society Value Criterion- The neg shall prevail if I can prove that economic sanctions are a worthwhile method to achieve foreign policy objectives. But the aff shall prevail if, and only if he can prove otherwise...... ...read more.

Many countries, particularly dictatorships but quite often also democracies such as the US, feel they can just ignore diplomacy if it is not backed up by anything more than a verbal lashing. Diplomacy needs something backing it up. At the moment this is the threat of some form of sanction (be it direct economic sanctions or more indirect be reducing the opportunities for that countries firms to operate in your market) or military action of some kind. Using military action as a threat can be extreme. How do you move between diplomacy and on to military action without something in the middle to show how serious your country is? If a country does not believe your threats, and you don't really want to attack him you have to be the one to back down. Providing economic sanctions creates a way of hurting him without having to go to the worse stage... which is military action. Military action is the obvious 'hard' alternative to sanctions. However it is not always possible. This could be because of domestic politics or because there is other significant actors in the international system who would react unfavorably to you engaging in military action, or else the consequences might be too severe. There are quite a few problems with military action apart from that it cant always be used due to politics. The most obvious is that it is an immense step up from diplomacy. ...read more.

When corrupt leaders give in to decency and cooperate, the sanctions go away. Sanctions are nothing more than a legitimate form of punishment to achieve a defined and acceptable code of behavior. Natural rights of citizens are denied when a corrupt leader interrupts the harmonious relations and it becomes necessary to impose sanctions. Further, I extend my VPC in that when the naturals rights of other nations are infringed upon by these corrupt leaders, political justification demands punishment in the least destructive manner after diplomacy has failed. Possible Rebuttal: Although careful studies of economic sanctions have cast doubt on their effectiveness, 1 anecdote can be powerful rhetorical tools. A single important case that demonstrates sanctions' potential allows advocates to argue that their cause is more akin to the success than to the failures. Frequently, advocates point to the case of sanctions applied in the mid-1980s against the apartheid regime in South Africa as just such a case. On the face of it, South African sanctions appear to have been successful. In response to the outrages of apartheid, many countries adopted trade and financial sanctions and a significant amount of foreign investment was withdrawn from South Africa. After the adoption of sanctions, South Africa experienced economic difficulty and numerous domestic actors commented on how the economic situation was untenable and required political change. By 1994, Nelson Mandela had been elected President of South Africa. He and other black leaders attributed to economic sanctions a significant role in bringing about the democratic transition. ...read more.