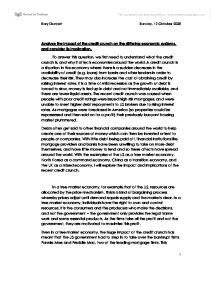 Analyse the impact of the credit crunch on the differing economic systems, and consider its implication.

Analyse the impact of the credit crunch on the differing economic systems, and consider its implication. To answer this question, we first need to understand what the credit crunch is, and why it affects economies around the world. A credit crunch is a situation in the economy where there is a sudden decrease in the availability of credit (e.g. loans) from banks and other lenders in order to decrease their risk. They may also increase the cost of obtaining credit by raising interest rates. It is a time of mild recession as the growth of debt is forced to slow, money is tied up in debt and not immediately available, and there are fewer liquid assets. The recent credit crunch was caused when people with poor credit ratings were issued high risk mortgages, and were unable to meet higher debt repayments to US brokers due to rising interest rates. As mortgages were foreclosed in America (so properties could be repossessed and then sold on for a profit) their previously buoyant housing market plummeted. Debts often get sold to other financial companies around the world to help create one of their sources of money which can then be invested or lent to people or companies. ...read more.

Private companies will also become more aware of the possible outcomes of their actions, and therefore there will be more risk management. North Korea is an example of a command economy. In this type of economy, the government or state controls all key areas of economic activity. This includes control of all major resources, ownership of most businesses, all of the resource allocation decisions to reflect the needs of the people, the construction of development plans on production targets and performance, and isolation from market economies. This means that the people are working for the common good, and own no property. It is the privately owned banks which caused the credit crunch, which are now being bailed out with the tax payer's money, when instead they should be being punished for the bad decisions they made. Due to the increased interest rates, the consumer wants have changed, as they do not want to borrow money at this troubled time, so they are only spending on necessity items. The market, which before provided a lot of luxury items, will need to change to accommodate for this. The collapse in the economic markets could cause another famine, similar to the one in the mid 1990's. ...read more.

The prosperity of the Chinese real estate market has been developed in accordance with its fast growing economy. A large amount of trade surplus has increased market liquidity and rising household incomes have supported a strong housing market. Due to limited exposure to US subprime mortgages, most Chinese commercial banks will not be critically impacted by the current crisis. Nonetheless, several recent developments, such as rising consumer prices, energy shortage, a struggling stock market and a cooler housing market imply that China, especially its commercial banks, cannot be complacent about a potential house market crash and wider financial crisis. To prevent such a crisis, Chinese banks need to strengthen their performance and adhere strictly to the lending criteria set by the People's Bank of China. The procedures in the mortgage services need to be tightened up and the banks should cooperate with other institutions to establish a comprehensive credit history system for homeowners and potential buyers. The final economy to be explored is the mixed economy of the UK. This is where the government and private sector interact in solving economic problems. This economy lies between the extremes of the command and the free market economies. In the UK, most decisions are made by the market, for example the consumer defining which goods the producer makes. However, some decisions are made by the government, for example public services. ...read more.