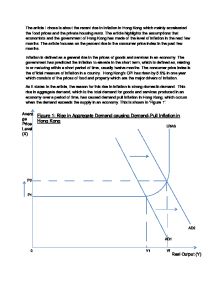 Article analysis. The article I chose is about the recent rise in inflation in Hong Kong which mainly accelerated the food prices and the private housing rents.

The article I chose is about the recent rise in inflation in Hong Kong which mainly accelerated the food prices and the private housing rents. The article highlights the assumptions that economists and the government of Hong Kong has made of the level of inflation in the next few months. The article focuses on the percent rise in the consumer price index in the past few months. Inflation is defined as a general rise in the prices of goods and services in an economy. The government has predicted the inflation to elevate in the short term, which is defined as, relating to or maturing within a short period of time, usually twelve months. The consumer price index is the official measure of inflation in a country. ...read more.

This increase in aggregate demand will however also increase the output from Y1 to Yf. Looking at the situation, if the demand in Hong Kong further rises, it will increase the prices with it which will result in a higher inflation rate which might worsen their economy. The writer vaguely identifies the cause of excess demand but does not talk about other causes such as cost pull inflation or inflation due to excess monetary growth that could have helped in driving inflation forward. He also states the problem of rising inflation that Hong Kong is facing, but does not put a possible solution with it. Also, he quotes what the government says is happening in the economy, but does not include the action that the government has decided to take or can take to overcome this problem. ...read more.

He also backs up the situation he talks about, with many figures and numbers that prove the validity of his article. The author does not determine the different stakeholders that could be or are being affected by this rise in inflation. Firstly, he writes about food prices that have risen from which we know that all consumers are being affected, as well as the government that has to provide food for the poor. Secondly, the prices of private housing rents rising as we know will only affect the middle class of the country. Businesses could be affected as they might have to produce more and might raise their prices because of the high aggregate demand. The suppliers have to produce more because of the high demand. In conclusion, the article precisely presents the problems but does not consider the implications of or offer solutions. ?? ?? ?? ?? ...read more.