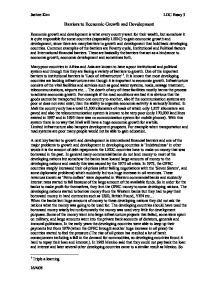 Barriers to Economic Growth and Development

Barriers to Economic Growth and Development Economic growth and development is what every country want for their wealth, but somehow it is quite impossible for some countries (especially LEDC) to gain economic growth and development, since there are many barriers to growth and development that hold back developing countries. Common examples of the barriers are Poverty cycle, Institutional and Political factors and International financial barriers. These are basically the barriers that act as a hindrance to economic growth, economic development and sometimes both. Many poor countries in Africa and Asia are known to have a poor institutional and political system and through this they are facing a variety of barriers to growth. One of the important barriers to institutional barriers is 'Lack of infrastructure'1. It is known that most developing countries are lacking infrastructure even though it is important to economic growth. Infrastructure consists of the vital facilities and services such as good water systems, roads, sewage treatment, telecommunications, airports etc... The dearth of any of these facilities mostly harms the process to achieve economic growth. For example if the road conditions are bad it is obvious that the goods cannot be transported from one country to another, also if the communication systems are poor or does not even exist, then the ability to organize economic activity is seriously limited. In Mali the country only has a total 15,100 kilometers of roads of which only 1,827 kilometers are paved and also the telecommunication system is known to ...read more.

the countries started to feel the pressure (The rise of oil prices has resulted a lot of harsh consequences including a fall in the demand for commodities, so developing countries found it hard to repay their loan and interest.). In 1982 Mexico said that they could not pay back the loan and interest and later several other developing countries came to a similar result as Mexico. So basically when the nation cannot use the money wisely than it is obvious that the chance of seeing rapid growth and development is zero and also they would have an increase in debt every day until they return back their loan and interest. DEBT OF DEVELOPING COUNTRIES2 Country Total debt outstanding 1999 (US $ billion) Total debt/GNI (ratio %) Total Argentina 148 56 456 Bolivia 6 37 193 Brazil 245 33 339 Indonesia 150 113 255 Nigeria 29 91 185 Venezuela 36 38 156 Peru 29 63 354 Sudan 16 172 1717 Ecuador 15 76 211 Syria 22 146 377 Ivory Coast 13 117 220 Cameroon 9 76 292 Sierra Leone 1 136 1234 By looking at the graph more than 50% of the total outstanding debt is accounted by Argentina, Brazil, and Indonesia but also countries like Venezuela and Nigeria got hit badly with the debt. In general if Venezuela would have had a different government than probably they would not exist in the list above, and they could be considered as a developed nation. ...read more.

In order for developing countries to gain economic growth and economic development their main focus should be strategies to reduce the barriers of growth and development. In general when the government focuses on the institutional barrier ('Lack of infrastructure') they should examine the developed countries first and then start planning for their country. Countries like Mali where they have a poor infrastructure should take South Korea as their model. South Korea was also a very poor nation during the 1960s but as they started get aid from the US (money) the government automatically spent it first on the infrastructure (motor way) and after they were all accomplished the nation was able to export products much faster. So in general rapid growth and development all happens depending on how much effort the government is putting. Poverty cycle and international financial barriers are also key barriers which the government has to reduce and as one of the articles had said before, the way to break the poverty cycle is to focus a lot on education (In China). For international financial barriers (Indebtedness) government should erase their selfish feelings on keeping the borrowed money for their wealth because later it can cause the country to suffer over debt (like Mexico and African nations.). http://www.chinadaily.com.cn/english/doc/2005-09/23/content_480262.htm Triple a learning Economics Review Economics course companion Glanville Jaehee7 jaeyun 1 Triple a learning 2 World Bank, World Development Indicators, 2001. 3 Economics Review 4 Triple a learning ?? ?? ?? ?? Jaehee Kim LDC Essay 3 16/4/08 ...read more.