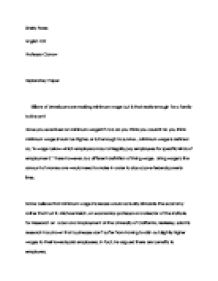 Billions of Americans are making minimum wage but is that really enough for a family to live on? Some believe that minimum wage increases would actually stimulate the economy rather that hurt it.

Shelly Flores English 102 Professor Canow Exploratory Paper Billions of Americans are making minimum wage but is that really enough for a family to live on? Have you ever lived on minimum wage? If not, do you think you could? Do you think minimum wage should be higher, or is it enough to survive ...Minimum wage is defined as, "A wage below which employers may not legally pay employees for specific kinds of employment." There however, is a different definition of living wage. Living wage is the amount of money one would need to make in order to stay above federal poverty lines. Some believe that minimum wage increases would actually stimulate the economy rather that hurt it. ...read more.

And the employers will have lower turnover costs." Heidi Shierholz, an economist at the left-leaning Economic Policy Institute, said it's one way to shift money from corporate profits -- which companies often sit on -- to low-income workers, who can do immediate spending. "When you get an increase in the minimum wage, you're getting a wage increase to the people that are low-wage families who depend on these earnings to make ends meet," said Shierholz. "They have no choice but to spend that money in their local economy. That's the stimulus you get." According to Shierholz, jacking the federal minimum wage from $7.25 to $8.25 would give a raise to 10 million workers, including many currently earning their state minimum wage. ...read more.

"Now, I've studied the arguments and the evidence for and against a minimum wage increase. I believe the weight of the evidence is that a modest increase does not cost jobs, and may even lure people back into the job market." (President Bill Clinton, State of the Union Address, Jan. 24, 1995) Then only a few days later contradicts his statement with another; "[ C]linton himself explained two years ago, hiking the minimum [wage] is 'the wrong way to raise the incomes of low-wage earners.'" (Time, February 6, 1995, p. 27) Some Americans have a grey interpretation on it such as Vicky White a psychologist states that "If you want more pay make yourself expensive, get an education like the rest of the people do. White also acknowledges that there must be a minimum wage set so that younger wage earners don't get taken advantage of. ...read more.