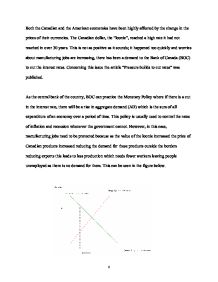 Both the Canadian and the American economies have been highly affected by the change in the prices of their currencies. Discuss.

Both the Canadian and the American economies have been highly affected by the change in the prices of their currencies. The Canadian dollar, the "loonie", reached a high rate it had not reached in over 30 years. This is not as positive as it sounds; it happened too quickly and worries about manufacturing jobs are increasing, there has been a demand to the Bank of Canada (BOC) to cut the interest rates. Concerning this issue the article "Pressure builds to cut rates" was published. As the central bank of the country, BOC can practice the Monetary Policy where if there is a cut in the interest rate, there will be a rise in aggregate demand (AD) which is the sum of all expenditure of an economy over a period of time. ...read more.

However, BOC apparently has only one concern, which is an increase in the inflation; a cause of cutting interest rates as the AD increases. This can be illustrated in the following figure. As can be seen in the graph, the increase in the AD caused by the cuts in the interest rate will increase the price and thus cause inflation which is the reason BOC does not want to cut the rates. Also, as mentioned in the article, the whole rise in the value went too far and too fast meaning things are not totally under control so the BOC is trying to keep its commitment in keeping "price inflation well under control" as Canada is already under some inflationary pressure at the moment. ...read more.

to increase the chance of exports getting sold in the U.S. this can be seen from a point of view where if the lending rates decrease, the qualified banks will be able to borrow more from the central bank and the borrowing and lending will be now between these banks where a borrower will gain from the lender and can use the money gained to be lent to the manufacturing industries so producing will not cost them as much and they can lower their prices making it easier for the products to be exported and sold outside the country. The relationship between a lower interest rate and loans can be seen in the figure below. The rise in the loonie had definitely caused trouble to manufacturers who, at the end, were promised, by the government, a tax break on equipment and machinery in two years leaving the struggle of BOC unresolved. ?? ?? ?? ?? 1 ...read more.