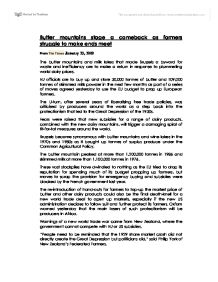 Butter mountains stage a comeback as farmers struggle to make ends meet From The Times January 23, 2009 The butter mountains and milk lakes that made Brussels a byword for waste and inefficiency are to make a return in response to plummeting world dairy prices. EU officials are to buy up and store 30,000 tonnes of butter and 109,000 tonnes of skimmed milk powder in the next few months as part of a series of moves agreed yesterday to use the EU budget to prop up European farmers. The U-turn, after several years of liberalising free trade policies, was criticised by producers around the world as a step back into the protectionism that led to the Great Depression of the 1930s. Fears were raised that new subsidies for a range of dairy products, combined with the new dairy mountains, will trigger a damaging spiral of tit-for-tat measures around the world. Brussels became synonymous with butter mountains and wine lakes in the 1970s and 1980s as it bought up tonnes of surplus produce under the Common Agricultural Policy. The butter mountain peaked at more than 1,200,000 tonnes in 1986 and skimmed milk at more than 1,100,000 tonnes in 1976. ...read more.

It can unleash a series of responses from other countries that could be dangerous in the long-term. Analysis Agricultural Products have a low price elasticity of demand, so if there is a good harvest supply increases and therefore prices will collapse, farmer's income will fall and cause many of the farmers will leave the industry. We can see in the graph that an increase in the amount produced from Q� to Q� there is a great decrease in the price from P� to P�. The opposite can happen when there is a bad harvest. Consumers would have to pay a higher price for a small quantity of food. To fix this problem the Common Agricultural Policy (CAP) was created by the EU. The CAP is a maximum price set to protect the consumers from paying a higher price for the product, and a minimum price is set to protect the producer so that the price does not decrease greatly and cause the producers to leave the industry. At the beginning of each period, a target price is set for each dairy product. The short run is a period in time where one or more factors of production are fixed in amount and the supply curves are vertical because in the short run the supply is fixed. ...read more.

A way of fixing this crisis is by doing nothing. Free trade is a policy that allows traders to act and transact without the interference of the government, allowing traders to have mutual gain from interactions with goods and services, produced according to the law of comparative advantage, which refers to the ability of a person or country to produce a good at a lower opportunity cost than other people or country. The law will allow every country to specialise in producing a particular good or service, in which they have a comparative advantage, which is better for LEDC's. Free trade policies will also reflect true demand and supply making it produce at the social optimum output which is where the country is productively and allocatively efficient, whereas the CAP changes supply and artificially manipulates price. Though there are many disadvantages to Free Trade it is said that the benefits far outweigh the costs. There is a current deregulation in the world market and whilst the EU make polite noises about fair trade it is unlikely to reverse the current situation as it could lead to a large fall in EU agriculture output and hence can greatly increase unemployment. I think that free trade is the best option as it will maximise output throughout the world and possibly increase the income per person in the world, which could then increase the standard of living. ...read more.