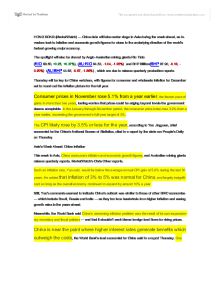 HONG KONG (MarketWatch) - China data will take center stage in Asia during the week ahead, as investors look to inflation and economic growth figures for clues to the underlying direction of the world's fastest-growing major economy. The spotlight will also be shared by Anglo-Australian mining giants Rio Tinto (RIO 68.50, +0.25, +0.37%), (AU:RIO 84.53, -1.04, -1.22%) and BHP Billiton(BHP 87.90, -0.18, -0.20%) (AU:BHP 44.62, -0.57, -1.26%) , which are due to release quarterly production reports. Thursday will be key for China watchers, with figures for consumer and wholesale inflation for December set to round out the inflation picture for the full year. Consumer prices in November rose 5.1% from a year earlier, the fastest pace of gains in more than two years, fueling worries that prices could be edging beyond levels the government deems acceptable. In the January-through-November period, the consumer price index rose 3.2% from a year earlier, exceeding the government's full-year target of 3%. The CPI likely rose by 3.5% or less for the year, according to Yao Jingyuan, chief economist for the China's National Bureau of Statistics, cited in a report by the state-run People's Daily on Thursday. ...read more.

The growth in the Chinese economy has grown the past decade; the problem that the government now face is the rise in inflation. The main factor that has led to inflation can be portrayed by the economic price theory of labour, where high labour prices reduces the demand, low labour prices increases demand. China has an almost unlimited supply of labour, land and capital, which, compared to other countries in the world, means more firms would rather set-up their industries in China for their low prices than in, eg. the USA where everything is much more expensive. When demand for labour increases, more people in China have work to do, this increases standards of living. People would begin to buy more; firms would raise prices of goods and services to increase total revenue, and therefore commodity prices would increase. This factor means CPI rises, and therefore inflation does too. The 3% - 5% inflation is quite normal for a developing country to have. However, though inflation shows the growth in the Chinese economy, the dilemma Chinese government faces is also due to inflation. ...read more.

Monetarists believe that long-run aggregate supply is not affected by the aggregate demand; to boost the economy, we shift long-run aggregate supply to the right. Different commodities have different situations. Fossil fuels, for example, cannot be applied to the monetarists theory as supply of such fuels will eventually diminish. However, if we are focusing on the production of many agricultural products, such as wheat or corn, producers can always find ways to match supply to the demand. Therefore, unlike the Keynesians' viewpoint, supply does not have a limit to its quantity produced. In China, fiscal policies are adapted through direct government interference. One of the most prominent examples is the subsidizing of agricultural developments. They provide equipment and funding to farmers so they could maximize production of primary factors such as food, and cotton. Manufacturers can then find ways to maximize output to meet demands. When food prices are stabilized, CPI will also be stabilized, thus inflation will be eased, the economy will be cool; this will prevent acid bubbles this year. In any case, though China's economy is growing at rapid speed, inflation is a factor that the Chinese government can no doubt tackle. The country itself is regulated by very traditional ways: regulations can always be applied on certain industries without the fear of rebellion or trade unions. ...read more.