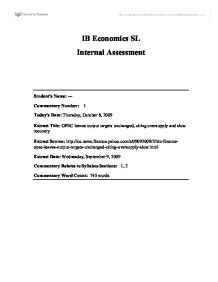 Commentary 1: The article deals with the OPECs decision to keep production quotas unchanged as the market is oversupplied with crude oil. Abiding by the fundamentals of supply[1] and demand[2], the worry of the OPEC member states involves

But el-Badri also stressed that the group was not ready to jeopardize the economic recovery efforts by pushing for steep cuts. "We are working on a very thin line," he said. "We have to be very careful. We don't want to take action that will jeopardize the recovery." Commentary 1: The article deals with the OPEC's decision to keep production quotas unchanged as the market is oversupplied with crude oil. Abiding by the fundamentals of supply1 and demand2, the worry of the OPEC member states involves the volatility of crude oil prices as the market is swarmed with a surplus3 of oil. Due to the dependence of the OPEC member states on the prices of crude and its derivatives, the organization has pledged to maintain the status quo of production quotas around the current price of $71. Essentially, as crude is the core ingredient for gasoline, its price will present numerous implications upon the market for various products. Below is the diagram indicating the market for crude in its current state with a surplus as a result of overproduction. As seen in Figure 1, A1 indicates the current state of OPEC oil production, which is much higher than the equilibrium4 point A0 indicated by Saudi representatives as around $75 per barrel, which is a "fair price for both producers and consumers". ...read more.