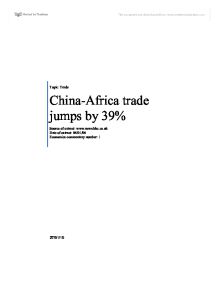 Topic: Trade China-Africa trade jumps by 39% Source of extract: www.news.bbc.co.uk Date of extract: 06/01/06 Economics commentary number: 1 27/01/10 The article deals with the increase of trade, economic transactions, between China and Africa. This exspansion was fuelled by Chinas increased imports of African oil, mainly from Sudan. Importing is the process of bringing goods from one country into another. Africa is buying more Chinese-made goods, items produced by China and China is increasing the amount of investments in Africa. Map 1: World map showing China and Africa China is trading with Africa because of the supply of oil and other raw materials, natural products used in manafacturing. China is the second largest consummer of petrolume products in the world and their percentage of consumption is increasing, therefore their demand or need for oil is high. ...read more.

Since Africa is exporting goods, sending goods to China, there is potentially room to barter on the price of the Chinese-made goods. China has scrapped tariffs for African goods, which means that African goods cost less than other countries goods to import into China. Chinese Firms have also increased investments, the amount of money they are putting into, African infrastructure. This is to develop the African infrastructure and makes it easier to transport goods, which would increase trade. China might be attempting to get Africa dependent on them, so that China can secure the fuel and raw materials that are needed to sustain, fulfill demand for the growing Chinese economy, since there is a scarcity or lack of oil and it will eventually become harder to import oil unless a solution is found. ...read more.

The increase of trading in Africa is beneficial, because it is helping to increase Africa's exports and the more they export the more it helps them towards escaping poverty and to solve some of the reasons other countries will no trade with them. The increase amount of exports will also help to raise the Gross Domestic Product, which is the total market value of goods and services produced by a country normally within a year. If these things increase it will help to make the country wealthier and to raise the quality of life, for example it could possibly decrease the amount of unemployment. Problems could arise from the trading. Pollution might increase due to the transport of the goods, and also there will be more goods in china which are capable of increasing pollution. It could possibly become unbeneficial for Africa if they became too dependent on china. ...read more.