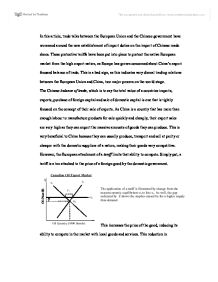 In this article, trade talks between the European Union and the Chinese government have worsened around the new establishment of import duties on the import of Chinese made shoes. These protective tariffs have been put into place to protect the native European market from the high export nation, as Europe has grown concerned about China's export focused balance of trade. This is a bad sign, as this indicates very dismal trading relations between the European Union and China, two major powers on the world stage. The Chinese balance of trade, which is to say the total value of a countries imports, exports, purchase of foreign capital and sale of domestic capital is one that is tightly focused on the concept of their sale of exports. ...read more.

Currently, the Chinese government is complaining to the World Trade Organization about the removal of the protectionist tariffs. The World Trade Organization is a major advocate for free trade and thus will probably side with China after its investigation. However, the issue that has pushed the implementation of this tariff will not have been solved at all (China's ability to sell cheaper than the domestic shoe industry). Thus any agreement reached within the coming years about this situation by the World Trade Organization will benefit China, because the Chinese government is in this situation solely for the removal of trade barriers, while the European Union is trying to defend it's trade barriers. This will also impact the European shoe industry negatively, because they will see loss of business to Chinese manufacturing as they would not be used to have that level of unimpeded foreign competition. ...read more.

Thus China could see sometime in their near future a world pushing her into a corner to remove her exchange rate peg or be excluded from world markets. This would be ultimately detrimental to China, because of the amount of money and world market share that the nation would lose to other countries. Some of this lost share in the world will definitely move to Europe, and so the European Union collectively benefit. It is in this sense that a possible reversal in roles may be seen - Europe to a benefactor and China to a loser. In conclusion, the European tariff on shoes will elicit a Chinese response to further their own balance of trade. This response will be an aggressive push to the WTO to further the Chinese balance of trade. This will benefit the Chinese in the short term with growth in trade, but will not help in the long term by increasing European hostility. ...read more.