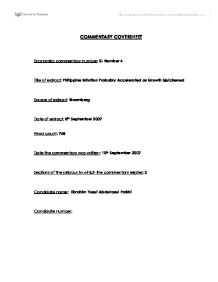 Commentary of Phillipine Inflation due to accelerated growth

Due to the lowering of interest rates by the Philippine authorities, the aggregate demand in the economy increases, which is depicted by the shift outwards of the AD curve from AD1 to AD2. This leads to economic growth where the real output increases from Y1 to Yf, however it also leads to an increase in the average price level from P1 to P2, and hence the AD shift is inflationary. At the moment, inflation rate is 'manageable' and any interference in the market may hamper the goal of achieving economic growth. However, it is predicted that 'Philippines' $117 billion economy may expand 7.1% this year', which 'exceeds the forecasts of the government' which is embarking on new projects and hence planning to inject money into the economy. This may turn into a dangerous situation for Philippine, if the economy is already at full employment level. Any increases in spending may turn out to be pure inflationary. Figure 2: Demand-Pull inflation- At Full Employment Level of Output In the diagram above we can see that the economy is at full employment level where AD1 cuts the LRAS curve at point A. ...read more.

A few of the supply-side policies include reduction in income taxes to provide incentive to workers to work harder, eliminating minimum wages, reducing unemployment benefits to push the unemployed to find work and privatisation of public firms so as to improve efficiency. However, these policies have drawbacks too, some of which include the fact that they take a long time to kick in, can reduce government revenue and reduce considerably living standards of the poor. Therefore, it is a necessity for the Philippine government to strike the right balance between which supply-side policy to use, and when to curb the aggregate demand in the economy. Definitions: a) Economic growth is a steady process by which the productive capacity is increased over a period of time( economics course companion) b) unemployment is "people of working age who are without work, available for work and actively seeking employment" (www.ilo.org) c) Inflation is a sustained increase in the general price level.( http://www.bized.co.uk ) d) Monetary policies are ones that use the level of the money supply and interest rates to influence the level of economic activity. ( http://www.bized.co.uk ) ?? ?? ?? ?? ...read more.