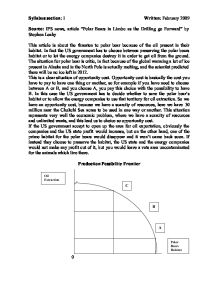 Syllabus section: 1 Written: February 2009 Source: IPS news, article "Polar Bears in Limbo as the Drilling go Forward" by Stephen Leahy This article is about the threaten to polar bear because of the oil present in their habitat. In fact the US government has to choose between preserving the polar bears habitat or to let the energy companies destroy it in order to get oil from the ground. The situation for polar bear is critic, in fact because of the global warming a lot of ice present in Alaska and in the North Pole is actually melting, and the scientist predicted there will be no ice left in 2012. This is a clear situation of opportunity cost. Opportunity cost is basically the cost you have to pay to have one thing or another, so for example if you have need to choose between A or B, and you choose A, you pay this choice with the possibility to have B. ...read more.

If instead they choose to preserve the habitat, the US state and the energy companies would not make any profit out of it, but you would leave a vats area uncontaminated for the animals which live there. Production Possibility Frontier 0 Point A on the diagrams shows the current situation in Alaska, where the entire wilderness is preserved and the minerals exportation is zero, and I t might stay like that if the US government choose not to let open up the area. Point B, if the government only give permission to certain companies and not open the area to everyone. Point C, instead, illustrate how the situation would be if the government decide to let the energies companies to act on Alaska. The square in diagram is the 30 million acres. ...read more.

Even if we are concerned about the polar bears' health and habitat, polar bears are not economically useful, as the US government doesn't earn anything by deciding to stop the oil extraction from their habitat. They can be considered as a public good. Goods freely available, either naturally, like air, or from the state, like education in most developed countries. Too many times society only looks at financial costs to decide the "best" option, however, opportunity cost give us a clearer indication of the true cost of our choices. Like Professor James M. Buchanan has explained in his book "The New Palgrave: A Dictionary of Economics." Even if Economics help us to see the consequences of our choices it still falls on the society to determine which option represent the "best" choice. Name: Alessandro Capozi Date: 05/02/2009 Date of the extract: 11/03/2008 Word count: 694 Source of the extract: IPS news "Polar bears in limbo as drilling leases go forward" by Stephen Leahy Section of the syllabus: Introduction to Economics, 1 ...read more.