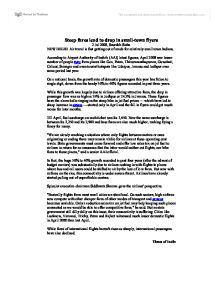 Steep fares lead to drop in small-town flyers 2 Jul 2008, Saurabh Sinha NEW DELHI: Air travel is fast getting out of reach for relatively small town Indians. According to Airport Authority of India's (AAI) latest figures, April 2008 saw lesser number of people flying from places like Goa, Patna, Thiruvananthapuram, Guwahati, Calicut, Srinagar and even tourist hotspots like Udaipur, Jammu and Jodhpur over same period last year. On a national basis, the growth rate of domestic passengers this year has fallen to single digit, down from the heady 30% to 40% figures recorded in past three years. While this growth was largely due to airlines offering attractive fares, the drop in passenger flow was as high as 35% in Jodhpur or 24.5% in Jammu. These figures have the alarm bells ringing as the steep hike in jet fuel prices - which have led to sharp increase in airfares - started only in April and the fall in flyers could get much worse for later months. Till April, fuel surcharge on each ticket was Rs 1,650. Now the same surcharge is between Rs 2,250 and Rs 2,900 and base fares are also much higher, making flying a fancy for many. "We are slowly reaching a situation where only flights between metros or ones originating or ending there may remain viable for airlines at these operating cost levels. ...read more.

It also comparatively shows how expensive travelling by car is becoming, due to the rising fuel coats. Figure 1 Concepts Involved: There are mainly three basic concepts involved in this article- 'Choice',' Necessity' and 'Price Elasticity of Demand'. 1. Choice: In today's day and age of cut throat competition, if we need to travel from New Delhi to Mumbai we have several options regarding as to what mode of travel that can be taken. Flying is obviously the fastest and least time consuming and according to popular belief was also very expensive. Since the introduction of low budget carriers, the cost of flying drastically reduced, as these airlines worked on a "NO FRILLS" policy meaning that they offered no service whatsoever. As a result travel by aeroplane became as expensive as travelling by a second or third class Air Conditioned compartment by the most popular mode of transport in India namely the Railways. As a Result the people travelling by rail reduced in the respective ticket brackets and the passengers aboard aeroplanes increased. People from smaller towns thus for better and quicker travel increased their journey a little bit out of choice and took a plane from the nearest airport of their departure to the airport nearest to their destination. Footnotes: 1. ...read more.