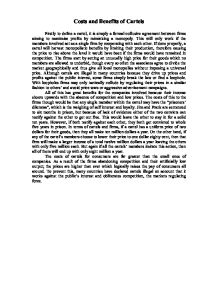 Cost and Benefits of a Cartel (Paper1 sample answer)

Costs and Benefits of Cartels Firstly to define a cartel, it is simply a formal collusive agreement between firms aiming to maximise profits by mimicking a monopoly. This will only work if the members involved act as a single firm by cooperating with each other. If done properly, a cartel will harvest monopolistic benefits by limiting their production, therefore causing the price to rise above the level it would have been if the firms would have remained in competition. The firms start by setting an unusually high price for their goods which no members are allowed to underbid, though every so often the associates agree to divide the market geographically and thus give all local monopolies without imposing a universal price. ...read more.

All of this has great benefits for the companies involved because their income shoots upwards with the absence of competition and low prices. The costs of this to the firms though would be that any single member within the cartel may have the "prisoners' dilemma", which is the weighing of self interest and loyalty. Jim and Frank are sentenced to six months in prison, but because of lack of evidence either of the two convicts can testify against the other to get out free. This would leave the other to stay in for a solid ten years. ...read more.

But again if all the cartels' members imitate this action, then all of them will end up with only eight million a year. The costs of cartels for consumers are far greater than the small ones of companies. As a result of the firms abandoning competition and their artificially low output; the prices are higher than ever which logically raises the pay of consumers all around. To prevent this, many countries have declared cartels illegal on account that it works against the public's interest and obliterates competition, the markets regulating force. ...read more.