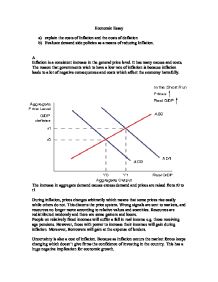 Costs of inflation and deflation and evaluation of supply side policies

Economic Essay a) explain the costs of Inflation and the costs of deflation b) Evaluate demand side policies as a means of reducing Inflation. A Inflation is a consistent increase in the general price level. It has many causes and costs. The reason that governments wish to have a low rate of inflation is because inflation leads to a lot of negative consequences and costs which affect the economy harmfully. The increase in aggregate demand causes excess demand and prices are raised from r0 to r1 During inflation, prices changes arbitrarily which means that some prices rise easily while others do not. This distorts the price system. Wrong signals are sent to markets, and resources no longer move according to relative values and scarcities. Resources are redistributed randomly and there are some gainers and losers. People on relatively fixed incomes will suffer a fall in real income e.g. those receiving age pensions. However, those with power to increase their incomes will gain during inflation. ...read more.

On the other hand, deflation is when the price level falls during a time period. We as consumers might be pleased to face falling prices. However, a significant number of problems can be associated with the fall in the price level. The biggest problem associated with deflation is unemployment. As aggregative demand decreases, firms are likely to lay off workers. This may then lead to deflationary spiral. If prices are falling, consumers will try to reduce their expenditure as they want to wait until the prices drop even further. This is called deferred consumption. This will lead into a further decrease in aggregative demand. During deflation, firms confidence is likely to be low, and this is likely to result in reduced investment. This has negative implications for future economic growth. Moreover, if profits are low, this may make too difficult for firms to pay back their loans and there may be many bankruptcies. This will further worsen the business confidence. ...read more.

If they do not expect high rates of inflation, then they will not make demands for increases in wages any higher than the expected and this will keep the cost of labour from rising excessively. Nowadays, monetary policy is considered to be the most successful way of controlling aggregative demand in the economy and changes in interest rates is considered as that the best weapon in the fight against inflation. Fiscal policy is not seen as effective as the monetary one. Because it would be very difficult for the government to reduce their spending, because of their commitments to the public. Moreover, it takes a lot of time to have any effect on the price level. If inflation is caused by a cost-push reason then deflationary demand-side policies may bring down the price level, but they will result in lower national output and are likely to cause unemployment to rise. Therefore, supply-side policies are used instead of demand-side policies. However, it is difficult to distinguish the demand-pull from the cost-push factors, and so policy-makers are likely to use a mix of solutions. ...read more.