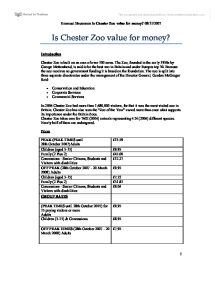 You can easily reach the zoo by following the brown Chester Zoo signs from M56, Junction 14 or Junction 12 on the M53. The zoo is also clearly signed on the A41 Chester road. Another opportunity is the bus or the train. Monday to Saturday the visitors can use the bus from Chester Railway Station and Chester Bus Exchange or from Ellesmere Port and Cheshire Oaks, Liverpool and Birkenhead every 20 minutes. Sundays every hour. Zoo shops All of the Chester zoo shops sell a wide range of merchandise to suit all price ranges, tastes and age groups. They offer an enormous range of animal-themed gift ideas, as well as books, videos and music. For your convenience films, batteries and other essentials are also available in the zoos retail outlets. The Ark Shop The largest shop is the "Ark Shop". It is located at the main entrance, sells a vast range of gifts and souvenirs. Open all year round, the Ark Shop also sells useful items to help make your visit more enjoyable, such as waterproof ponchos and umbrellas, should the weather take an unexpected turn for the worst. The Fountain Shop Conveniently located in the centre of the Zoo, the Fountain Shop sells a wide range of gifts and is open all year round. ...read more.

In other European zoos the admission fee is the half (for example Berlin) and you get a much more breadth variety of animals there. Because most of the areas in the zoo are not be roofed, that's a big problem for the zoo that the visitors won't come on rainy days and spend no money on the zoo. Opportunities A lot people are watching animal documentations on TV. You also can go to the cinema and watch animal film. Threats Our guide told us that when Greenpeace had a demonstration against the bad care for animals in Britain Zoos they didn�t come to Chester Zoo because they have the highest standards of welfare and the best care for all animals. Conclusion All in all Chester Zoo is a very good Zoo, but there are Zoos in Europe which can offer you a wider variety of animals and a lower admission fee. On the other hand Chester Zoo is a foundation which has to be in a plus at the end of a year most of the other Zoos are subsidized by the government. Chester Zoo also is very interested in education and wants to give the visitor a lot of knowledge to save the environment. Therefore Chester Zoo is value for money. ?? ?? ?? ?? Emanuel Hausmann Is Chester Zoo value for money? 08/11/2007 1 ...read more.