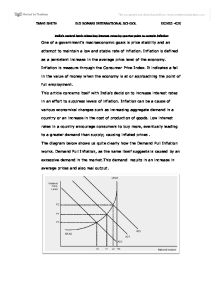 India's central bank raises key interest rates by quarter point to contain inflation One of a government's macroeconomic goals is price stability and an attempt to maintain a low and stable rate of inflation. Inflation is defined as a persistent increase in the average price level of the economy. Inflation is measure through the Consumer Price Index. It indicates a fall in the value of money when the economy is at or approaching the point of full employment. This article concerns itself with India's decision to increase interest rates in an effort to suppress levels of inflation. Inflation can be a cause of various economical changes such as increasing aggregate demand in a country or an increase in the cost of production of goods. Low interest rates in a country encourage consumers to buy more, eventually leading to a greater demand than supply; causing inflated prices . ...read more.

If, there is a high rate of inflation, then banks raise their nominal interest rates in order to keep the real rate that they earn positive. As Inflation leads to a rise in the general price level money loses its value. When inflation is high, people may lose confidence in money as the real value of savings is severely reduced. Savers will lose out if nominal interest rates are lower than inflation - leading to negative real interest rates. Consequently, there has been a 0.25% (from 6.25% to 6.50%) increase in the bank's interest rates on loans that are being borrowed. It is simple to understand that an increase in these rates, dissuade consumers from taking loans eventually preventing the public in India from consuming more. The diagram below shows an actual fall in the prices ( a suitable solution to level the increase in prices in India)- " inflationary pressures, which were already strong, have intensified in emerging economies due to sharp increases in food, energy and commodity prices." ...read more.

Investment is not vulnerable to changes in expectations and so a rise in interest rates will decrease aggregate demand; eventually decreasing inflation. The author also briefly mentions briefly states that economies of 'more developed' nations such as United States of America are also recovering from recession, faster than expected. However the author fails to put light on how this is taking place there and whether the U.S government is using the same Monetarist method by increasing interest rates like in India. It is evident from the article that the Indian Economy is slowly and steadily coming out of recession. Measures at controlling inflation in India have been successful especially in the Agricultural Sectors of India. The growing economy of India continues to go even through the inflation- "The robustness of growth is also reflected in corporate sales, tax revenues and bank credit, notwithstanding some moderation in the index of industrial production." TANVI SHETH B.D SOMANI INTERNATIONAL SCHOOL 002602-020 ...read more.