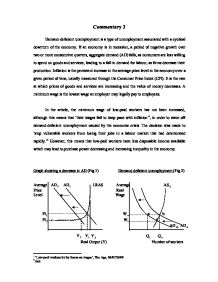 Commentary 3 Demand-deficient unemployment is a type of unemployment associated with a cyclical downturn of the economy. If an economy is in recession, a period of negative growth over two or more consecutive quarters, aggregate demand (AD) falls, as consumers are less willing to spend on goods and services, leading to a fall in demand for labour, as firms decrease their production. Inflation is the persistent increase in the average price level in the economy over a given period of time, usually measured through the Consumer Price Index (CPI). It is the rate at which prices of goods and services are increasing and the value of money decreases. A minimum wage is the lowest wage an employer may legally pay to employees. In the article, the minimum wage of low-paid workers has not been increased, although this means that 'their wages fail to keep pace with inflation'1, in order to stave off demand-deficient unemployment caused by the economic crisis. ...read more.

The average price level also decreases from Pl to Pl. This reduction in real output may lead to a diminishing demand for labour leading to demand-deficient unemployment, as illustrated in Figure 2. If the economy is working at a high level, the labour market is in equilibrium, with wages at W for Q workers. If there is a recession, firms will decrease their demand for labour from AD to AD. However, as minimum wages are unlikely to decrease, the average real wage will remain at W meaning that the aggregate supply of labour, AS, is greater than the aggregate demand for labour, creating unemployment a-b. When evaluating the economic theory, it can be seen that keeping minimum wages low has a positive effect on unemployment in an economy in recession. Although aggregate demand may decrease, lowering the real output of the economy, firms may be more willing to retain labour if there are no extra costs of production associated with it. ...read more.

Using fiscal policy, income taxes can be decreased, increasing the disposable income of the consumer, or decrease corporate taxes, leaving firms more of their profits which they can reinvest in the economy. Using monetary policy, the interest rates can be decreased, reducing the cost of borrowing and increasing consumption and investment. If the aggregate demand increases due to these policies, production would increase as well and more workers would be needed, decreasing the level of unemployment. Moreover, if the Australian economy started doing well again, the freeze on minimum wages would most likely be revoked, giving the low-paid workers more disposable income and increasing their standards of living. However, these policies would only work in the long-term, because a change in the aggregate demand cannot occur from one day to the other, making these policies ineffective in the short-term. 1 'Low-paid workers hit by freeze on wages', The Age, 08/07/2009 2 ibid 3 ibid 4 ibid ?? ?? ?? ?? ...read more.