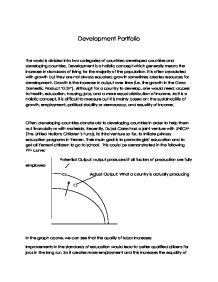 Development Portfolio The world is divided into two categories of countries: developed countries and developing countries. Development is a holistic concept which generally means the increase in standards of living for the majority of the population. It is often associated with growth but they are not always equated, growth sometimes creates resources for development. Growth is the increase in output over time (i.e. the growth in the Gross Domestic Product 'GDP'). Although for a country to develop, one would need: access to health, education, housing, jobs, and a more equal distribution of income. As it is a holistic concept, it is difficult to measure but it is mainly based on: the sustainability of growth, employment, political stability or democracy, and equality of income. ...read more.

This could be demonstrated in the following PPF curve: Potential Output: output produced if all factors of production are fully employed Actual Output: What a country is actually producing In the graph above, we can see that the quality of labor increases Improvements in the standards of education would lead to better qualified citizens for jobs in the long run. So it creates more employment and this increases the equality of distribution and thus more people would spend which leads to an increase in government tax revenues. This could result in higher public spending, allowing there to be public and merit goods available. ...read more.

In Yemen, the traditional and cultural customs of schools are that they would be separate for the boys and girls. So when the UNICEF builds schools that are uni-sex then this somewhat interferes with the Yemeni customs and this is seen as a negative consequence for most of those who live in the rural areas and some urban. A result of this could be that families don't allow their children, especially girls, to go to school and the whole point of increasing the girls' education fails. Not only are they trying to improve primary education, but also works toward ensuring the supply of fresh water and sanitation as well as renewing damaged school premises and supplying school materials. ...read more.