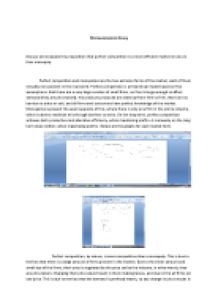 Discuss and evaluate the proposition that perfect competition is a more efficient market structure than monopoly.

﻿Microeconomics Essay Discuss and evaluate the proposition that perfect competition is a more efficient market structure than monopoly. Perfect competition and monopolies are the two extreme forms of the market, each of them virtually non-existent in the real world. Perfect competition is a theoretical model based on five assumptions: that there are a very large number of small firms, no firm is large enough to affect demand (they are price takers), the products produced are identical from firm to firm, there are no barriers to entry or exit, and all firms and consumers have perfect knowledge of the market. Monopolies represent the exact opposite of this, where there is only one firm in the entire industry, which is able to maintain this through barriers to entry. On the long term, perfect competition achieves both productive and allocative efficiency, while maximizing profits. A monopoly on the long term does neither, when maximizing profits. Below are the graphs for each market form. Perfect competition, by nature, is more competitive than a monopoly. ...read more.

Both producer and consumer surplus are maximized. Meanwhile, the firms also achieve productive efficiency in the perfectly competitive market. Meaning MC=AC, or the firm is producing with the minimum amount of recourses. Since all firms are producing at this level, there is no waste in the market. An example of a near perfectly competitive market in the real world would be the wheat market. There is a very large amount of producers, none of which are large enough to affect the price. They all charge very similar prices and their goods are essentially identical. In monopolies, there exists only one firm, protected by barriers to entry on other firms. There are numerous possible barriers to entry, some instated by the law, and others naturally. In the long run, a monopoly does not produce at allocative efficiency, or AR=MC. This means that the firm is not producing at the optimal level for consumers. In fact, most of the time, a monopoly restricts supply, to charge higher prices and maximize profit. This means a consumer would have to pay higher prices for the good, than in a perfectly competitive market. ...read more.

Additionally, large economies lose incentive to invest in production and advancements of their goods because they do not have competition to fear. During the 1990s Microsoft virtually had a monopoly in the software industry. Due to this monopoly, they lost incentive to advance their software. Although they did release new software, most of it, was virtually the same as its predecessor. In conclusion, the statement that claims that a perfect competition is more efficient than a monopoly is true. Perfect competition satisfies both methods of measuring efficiency, whereas a monopoly satisfies none, when profit maximizing. In a perfect competition, the consumer and producer surpluses are maximized, meaning Pareto optimality is achieved. Additionally, the lower prices of goods, means that the consumer has more disposable income to buy other goods, yielding a positive externality to third parties. This also aids economic growth. A monopoly often loses incentive to invest in their goods and products due to them being the sole seller of their good. This stalls advancements in technology, and means the PPC does not shift further outwards, stunting economic growth. ...read more.