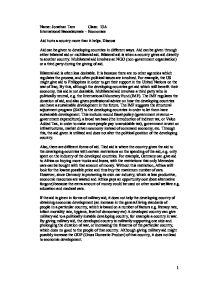 Discuss how aid can both harm and hurt a country

Name: Jonathan Tam Class: 13A International Baccalaureate - Economics Aid hurts a country more than it helps. Discuss Aid can be given to developing countries in different ways. Aid can be given through either bilateral aid or multilateral aid. Bilateral aid is when a country gives aid directly to another country. Multilateral aid involves an NGO (non-government organization) or a third party during the giving of aid. Bilateral aid is often less desirable. It is because there are no other agencies which regulates the process, and often political issues are involved. For example, the US might give aid to Philippines in order to get their support in the United Nations on the war of Iraq. By this, although the developing countries get aid which will benefit their economy, this aid is not desirable. Multilateral aid involves a third party who is politically neutral, e.g. ...read more.

Without this restriction, Africa will look for the lowest possible price and thus buy the maximum number of cars. However, since Germany is protecting its own car industry, which is less productive, economic resources are wasted and Africa pays an opportunity cost (best alternative forgone) because the extra amount of money could be used on other social welfare e.g. education and medical care. If the aid is given in forms of military aid, it does not help the developing country of obtaining economic development (an increase in the general living standards of people in a particular country, which is based on a number of factors e.g. literacy rate, infant mortality rate, hygiene, level of democracy etc) A developed country can give military aid to a politically instable developing country, for example a country in war. By giving military aid, the developed country is militarily supporting one side and prolonging the duration of war, or increasing the firearms of the particular country, which does no good to the people of that country. ...read more.