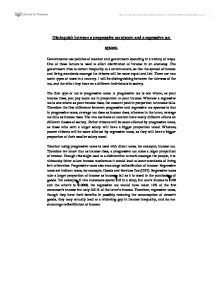 Distinguish between a progressive and regressive tax

Distinguish between a progressive tax system and a regressive tax system Governments use policies of taxation and government spending in a variety of ways. One of these factors is used to affect distribution of income in an economy. The government tries to correct inequality to a certain extent, so that the spread of income and living standards amongst its citizens will be more equal and fair. There are two main types of taxes in a country. ...read more.