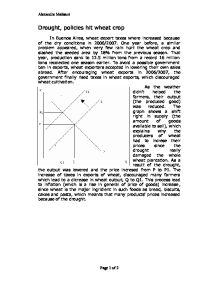 Drought, policies hit wheat crop In Buenos Aires, wheat export taxes where increased because of the dry conditions in 2006/2007. One year before, a similar problem appeared, when very few rain hurt the wheat crop and slashed the seeded area by 18% from the previous season. That year, production sank to 12.5 million tons from a record 16 million tons recolected one season earlier. To avoid a possible government ban in exports, wheat exporters accepted in lowering their own sales abroad. ...read more.

As a result of the drought, the output was lowered and the price incresed from P to P1. The increase of taxes in exports of wheat, discouraged many farmers which lead to a dicrease in wheat output, Q to Q1. This process lead to inflation (which is a rise in general of price of goods) increase, since wheat is the major ingridient in such foods as bread, biscuits, cakes and pasta, which meants that many products' prices increased because of the drought. ...read more.

The government decided to ban exports to mantain the price low in the country, which is shown in the graph with the shift left of the demand curve from D to D1, which resluted with a dicrease of price from P1 to P. As a result of the ban of exports made by the government, the price was kept low, but the quantity of wheat sold by the producers of wheat felt drastically. ?? ?? ?? ?? Alexandre Malisani Page 1 of 2 ...read more.