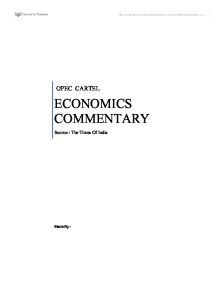 OPEC CARTEL ECONOMICS COMMENTARY Source-: The Times Of India Made By:- Cartel-: It is a formal agreement between firms, when firms decide to collude with each other and act as a monopoly, which includes that that the firms will not compete with each other on price. Cartels usually occur in an oligopolistic industry, where there is small number of sellers and firms produce homogenous products. Cartel members may generally agree on price fixing, total industry output, market share, and allocation of customers, allocation of territories, big rigging, and establishments of common sales agency. The aim of such collusion is to increase profits by reducing competition. OPEC (Organisation of petrol exporting countries) is the finest example of a cartel; it is a legal collusion between firms, where different oil producing countries join hands with each of them to follow non price competition. ...read more.

shows the abnormal profits being earned by OPEC, after acting as a cartel, excess price reduced the rate of increase in demand for oil, because the countries cannot avoid the use if oil in the short run, so they started making much more efficient use of the oil they used to buy, hence reducing the growth of demand. UNSTABLE PRICES & FALLING DEMAND (1970 Scenario) NON- OPEC MEMBERS- The countries which were not involved with OPEC started producing as much as possible and meeting the consumers demand at a lower rate than OPEC'S. This gave the opportunity to the regional and non-OPEC members to produce to the optimum limit, hence making huge amount of profits. The countries which were within the boundaries of OPEC also started producing according to their limits and thus this gradually increased the ...read more.

with OPEC, should have started production to get some hold of profit from increasing demand, but all the sources of supply and production of oil by the other countries and organizations have finished and now the countries will have to use expensive technology to extract oil which will cause them( the non-OPEC members and firms) a huge increase in average costs. OPEC has got huge oil reserves and production possibilities, but OPEC will not squeeze all of it, in the market, OPEC will keep the oil reserves intact and take long time to build upon new oil fields and keep the supply in control, to charge between a profitable range of $60 & $80. Conclusion The government will demand highest efficiency from the usage of oil and spend money on increasing the efficiency. ?? ?? ?? ?? ...read more.