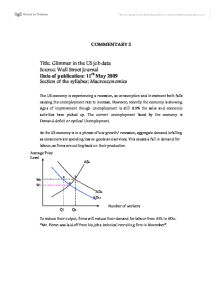 COMMENTARY 2 Title: Glimmer in the US job data Source: Wall Street Journal Date of publication: 11th May 2009 Section of the syllabus: Macroeconomics The US economy is experiencing a recession, as consumption and investment both falls causing the unemployment rate to increase. However, recently the economy is showing signs of improvement though unemployment is still 8.9% the sales and economic activities have picked up. The current unemployment faced by the economy is Demand-deficit or cyclical Unemployment. As the US economy is in a phrase of low growth/ recession, aggregate demand is falling as consumers are spending less on goods and services. This causes a fall in demand for labour, as firms are cutting back on their production. ...read more.

Sales and construction activity picked up in March; consumer surveys show households are gaining confidence; and business surveys indicate companies' outlooks, too, are brighter." We can predict that in the coming weeks aggregate demand will pick up, the economy will enter the recovery phrase and the cycle will repeat itself. Although households are gaining confidence unemployment is still a concern for the people and government. Real GDP Time In this situation the government should increase its spending to fill up the deflationary gap and too boost demand. The government could adopt the following policies: The Keynesian Multiplier1 should be taken into effect; an increase in government spending would result in a proportionately larger increase the national income. ...read more.

as a corrective measure for the fall in aggregate demand, since, due to low interest rates, consumers would be tempted to spend; which would increase consumer spending. Consumer Spending being a component of Aggregate demand would result in increasing aggregate demand since AD = C + G + I + (X - M). Thus with the increase in investments and consumer spending, the aggregate demand would also increase and unemployment would decrease. If consumer confidence is low, then there is unlikely to be an increase in borrowing to finance consumption and investment. There is likely to be a lag before the policy comes into effect. If the economy has already recovered, the extra impetus can be inflationary. 1 Glanville, Page number: 265 ?? ?? ?? ?? ...read more.