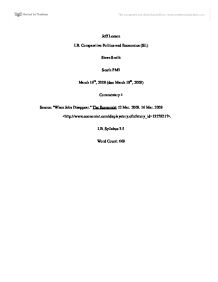 Jeff Leeson I.B. Comparative Politics and Economics (SL) Steve Smith South PM3 March 16th, 2009 (due March 18th, 2009) Commentary 4 Source: "When Jobs Disappear." The Economist 12 Mar. 2009. 16 Mar. 2009 <http://www.economist.com/displaystory.cfm?story_id=13278217>. I.B. Syllabus 3.5 Word Count: 669 This article is talking about how the unemployment rate around the world has soared due to lack of money flowing through the economy. It goes into detail about how employers who were confident on hiring workers last year are now expecting a decrease in jobs in their company. This is happening because people are spending less so, in turn, companies have to cut their costs of production or lay off workers. ...read more.

* Structural Unemployment: Occurs when there is a permanent fall in the demand for a particular type of labor. This is probably the worst kind of unemployment because the people who just lost their jobs lack the proficiency to move on to the newly created ones. * Labor Market: Includes all the demand for labor (construction, teaching, etc.) and all the workers in an economy willing to work at an average wage rate. Also called aggregate demand and aggregate supply. The article talks about these concepts in the following ways: * Cyclical Unemployment: This is basically what the article is about. ...read more.

* Labor Market: The article mainly focuses on aggregate demand for labor and how it has dropped. This means that there's all around less work and more unemployed people. It has come about like this because people have less money and are spend less so companies have less profit that they can use to hire and maintain workers and their salaries. This article is very complete; all of its statements are back up with facts and dates. It doesn't just focus all of its information on the US but includes many other countries that have been affected by this economic downturn and are facing unemployment issues of their own. It's written by The Economist which is a reliable source of information on the many parts of the world economy. ...read more.