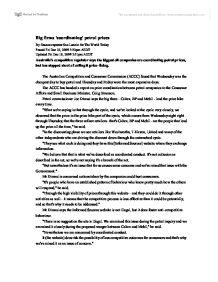 Big firms 'coordinating' petrol prices By finance reporter Sue Lannin for The World Today Posted Fri Dec 18, 2009 3:32pm AEDT Updated Fri Dec 18, 2009 3:51pm AEDT Australia's competition regulator says the biggest oil companies are coordinating petrol prices, but has stopped short of calling it price-fixing. The Australian Competition and Consumer Commission (ACCC) found that Wednesday was the cheapest day to buy petrol and Thursday and Friday were the most expensive days. The ACCC has handed a report on price coordination between petrol companies to the Consumer Affairs and Small Business Minister, Craig Emerson. Petrol commissioner Joe Dimasi says the big three - Caltex, BP and Mobil - lead the price hike every time. "What we're saying is that through the cycle, and we've looked at the cycle very closely, we observed that the price in the price hike part of the cycle, which occurs from Wednesday night right through Thursday, that the three refiner retailers - that's Caltex, BP and Mobil - are the people that lead up the price all the time," he said. ...read more.

Also, oligopoly tends to have a rigid price. Prices in oligopoly tend to change much less than a more competitive market. The two key features of oligopoly are barriers to entry and interdependence of the firms. This means each firm is mutually dependent and so is affected by its rivals' actions. For example, if one firm raises or lower the price, the sales of other firms will be affected. Therefore, the interdependence of firms may make them want to collude. If they can make a deal together and act as a monopoly, when only one firm dominates the industry, they could maximize industry profits. Sometimes, however, they may want to compete with their rivals to gain a bigger share of industry profits for themselves. In this case, Caltex, BP and Mobil are trying to "coordinate conduct" in order to maximize industry profits. According to the article, they "lead up the price all the time", "exchange information" through the website and what they are doing is "foster[ing] anti-competitive behavior". This is clearly a collusive oligopoly for petrol market in the US. ...read more.

The government also may import petrol from other country to compete with Caltex, BP and Mobil. So the consumer will have more choices from other countries and moreover, the price will not be held too high all the time. However, the disadvantage for this solution is that it will lower domestic market's profit. And this will cause the US petrol firms can't do more research and development on their products. As the graph shown, if the government successfully solves the problem of collusive oligopoly, the demand will become a kinked demand curve. The demand is relatively elastic at higher prices, because if the firm raises its prices, no one will follow. The demand is relatively inelastic at lower prices, because if the firm reduces price, rivals are forced to lower theirs. In brief, the best solution for the government is to import petrol from other countries because the domestic petrol market is colluding to earn abnormal profits, which is not fair to other firms and consumers. Also, this action would increase supply and change the current market situation to a competitive one. Moreover, the price would be more stable and consumers would have more choices to purchases. Sloman, J. Essentials of Economics. 4th edition. 2007 ?? ?? ?? ?? ...read more.