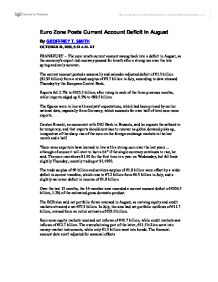 Euro Zone Posts Current Account Deficit in August By GEOFFREY T. SMITH OCTOBER 22, 2009, 5:32 A.M. ET FRANKFURT -- The euro zone's current account swung back into a deficit in August, as the economy's export-led recovery paused for breath after a strong run over the late spring and early summer. The current account posted a seasonally and calendar-adjusted deficit of �1.3 billion ($1.95 billion) from a revised surplus of �3.7 billion in July, according to data released Thursday by the European Central Bank. Exports fell 2.7% to �105.5 billion, after rising in each of the three previous months, while imports edged up 0.5% to �99.5 billion. The figures were in line with analysts' expectations, which had been primed by earlier national data, especially from Germany, which accounts for over half of total euro-zone exports. Carsten Brzeski, an economist with ING Bank in Brussels, said he expects the setback to be temporary, and that exports should continue to recover as global demand picks up, irrespective of the sharp rise of the euro on the foreign exchange markets in the last month and a half. ...read more.

Balance of trade is the difference between the value of visible exports and the value of visible imports.2 Therefore a deficit trade balance means that the value of total imports exceeds the value of total exports. In the case of Euro-Zone "Exports fell 2.7% to �105.5 billion while imports edged up 0.5% to �99.5 billion" leading to a deficit of �6 billion. Since exports are falling at a higher pace than imports, and imports are increasing at a higher pace, Euro-zone's balance of trade is seeing further deterioration. The European Single currency Euro (�) is the official currency for 16 states thus, Euro zone has suffered a total current account deficit of �106.5 billion over 12months. As being members of EU the 16 countries are not able to depreciate or devaluate their currency to ease the current account, also they have to adopt the interest rate set by ECB. Germany, which accounts for over half of total euro-zone exports, is at loss being a member of euro-zone because even after having high exports it accounts a current deficit. AD= C+ I+G+(X-M), with the decrease in exports and increase in imports Aggregate demand decreases. ...read more.

There would be improvement in current account as export revenue rises and import expenditure decreases. However, current account will come out of deficit only if it meets the Marshall-Lerner condition of elasticity: PED export + PED import > 1. "The euro rose above $1.50 but fell back slightly recently trading at $1.4950." The Euro has shown a slight depreciation in its currency which is good news for the economy. Protectionist Measures: Imposing protection on Imports could increase domestic production. However this is not a long term solution. If EU imposes protectionism its relations with other countries might be affected. Expenditure-Reducing Policies: are policies implemented by the government that attempt to reduce overall expenditure in the economy, so shifting AD to the left.6 Deflationary Fiscal Policy: This policy would increase the direct tax on people. There is likely to be a fall in domestic employment due to this policy. Deflationary Monetary Policy: Currently the ECB is following this policy, increasing interest rates thus increasing capital inflow. However, the Euro Zone's current account deficit is not set off by this because "the financial account data aren't adjusted for seasonal effects". 1 Blink, Jocleyn and Dorton, Ian. 289 2 Glanville,Alan.618 3 Glanville,Allan.621 4 Glanville,Allan.618 5 Blink, Jocleyn and Dorton, Ian. 296 6 Blink, Jocleyn and Dorton, Ian. 297 ?? ?? ?? ?? ...read more.