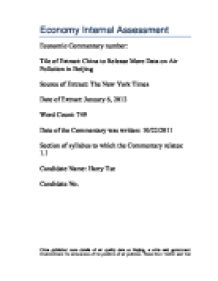 Economy Internal Assessment Economic Commentary number: Tile of Extract: China to Release More Data on Air Pollution in Beijing Source of Extract: The New York Times Date of Extract: January 6, 2012 Word Count: 749 Date of the Commentary was written: 10/22/2011 Section of syllabus to which the Commentary relates: 1.1 Candidate Name: Harry Tse Candidate No. China published more details of air quality data on Beijing, a critic said government Underestimate the seriousness of the problem of air pollution. News from Twitter said that Beijing's "blue sky days''s air quality is still poor compared to the United States. Traffic jams and smog in the capital made the public mad and caused damage to the city's leaders. Beijing's air pollution is mainly from using of cars and the production of the factors. The air pollution in Beijing is a negative externality. ...read more.

This is a negative externality to the whole society and it's a market failure. There are few different ways for government to solve this problem via either consumers or producers. First, government can put a higher taxation on cars. This increases the cost of the car therefore price of the car will increase. According to the law of demand, quantity demand will fall when price increase, therefore the quantity demand of car will decrease. This minimizes the amount of consumers entering the market. An imperfect side of this action could outcome a small economic decline but it's tiny compare to China's manufacturing Second, the China government can do what they did during the Olympics that allowed private cars on the road by their license plate number. Legislation is a type of determinant of quantity demand. It limits the quantity demand limiting the use of car. ...read more.

Thus, under free market condition, consumers will consume at P2Q2 and market failure reduces down from the yellow area down to the purple area. Above investigate is only about overconsumption of use of cars another reason as above mention could be over production of factories which outcome air pollution to the whole society. Government can increase tax on the firm that is overproducing goods, which out come air pollution that affect the whole society. Quantity supply of production of factories will fall as an outcome. Also, China government can introducte tradable permits to fix the amount of polluted air every year, here a government issues license tradable emission license to producers and they are allowed to pollute up to a designed level and the amount of pollution are allowed to sell their permit to other producers. These are all doable solution to minimize the amount of air pollution in Beijing, thus to reach the measurement standard of tiny particles that are 2.5 microns or less in diameter. ...read more.