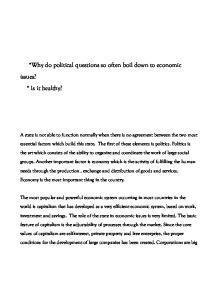 Why do political questions so often boil down to economic issues? Is it healthy?

*Why do political questions so often boil down to economic issues? * Is it healthy? A state is not able to function normally when there is no agreement between the two most essential factors which build this state. The first of these elements is politics. Politics is the art which consists of the ability to organize and coordinate the work of large social groups. Another important factor is economy which is the activity of fulfilling the human needs through the production , exchange and distribution of goods and services. Economy is the most important thing in the country. The most popular and powerful economic system occurring in most countries in the world is capitalism that has developed as a very efficient economic system, based on work, investment and savings. The role of the state in economic issues is very limited. The basic feature of capitalism is the adjustability of processes through the market. Since the core values of capitalism are self-interest, private property and free enterprise, the proper conditions for the development of large companies has been created. ...read more.

Children who did these shoes get only 2 dollars per day. It is not 2 dollars for every pair of shoes made, these are 2 dollars for a day of hard work, and it is known that during such a day more than one pair of shoes will be produced. Children are first who suffer the consequences of economic inequality. Europeans and Americans wear the clothes made by little children in the east, when these children, although they produce clothes, they can not afford to buy them. In 2001, 31 million American teenagers aged 12 to 19 have spent 155 billion on consumer durables. After 4 years 33,5 million American teenagers have spent 169 billion on consumer durables, which gives around 91 dollars per person, per week. If children in the east earn 2 dollars per day, it gives only 10 - 14 dollars per week, depending on how many days children work. It shows the economic differences between the second world and the third world. Employers do not pay the same salaries people in the west and east. ...read more.

In the United States, a place, where the large corporations have their headquarters, there has occured a phenomenon of addiction of politicans from the buisness. Corporations are powerful and rich, they have a lot of money. Nowadays money makes the world go round, therefore politicans are very intrested in large corporations. Politicans have power and corporations have money. These two things bound together give the absolute power. Politicans want to have money and power, which would enable them to improve the living standards in the country, to introduce reforms. To make people live better. Since corporations have a huge amount of cash, they have a great influence on politics. Politicans want to be in good relations with the corporations and they turn a blind eye to the things that corporations do, for exaple the exploitation of children. Is it healthy? It is very good for politics and economy to be in harmony with each other, but politics should not concentrate only on economy. Of course money is very important in the country, but there are many things that are also important. This concentration on economy causes the economic inequality, which may be profitable for some people. ...read more.