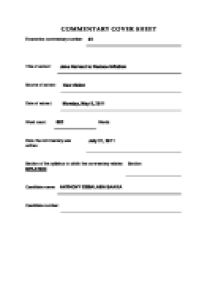 COMMENTARY COVER SHEET Economics commentary number: #2 Title of extract: June Harvest to Reduce inflation Source of extract: New vision Date of extract: Monday, May 9, 2011 Word count: 682 Words Date the commentary was written: July 21, 2011 Section of the syllabus to which the commentary relates: INFLATION Section: Candidate name: ANTHONY ZEBALABA SAAKA Candidate number: June Harvest to Reduce inflation Inflation refers to a persistent rise in the general price level in a given period of time usually one year. There are two main types of inflation namely, demand pull inflation and cost push. Demand pull inflation is caused by raising aggregate demand that pulls up prices in the economy. There are several factors that cause this type of inflation, for example, when government reduces income tax leaving consumers with more disposable incomes to spend. ...read more.

This inevitably makes food prices to rise. Furthermore, the article says that the rise in inflation has also been due to increase in international crude oil prices that have resulted into increases in the pump prices of fuel. Fuel is a major component in the production process and so any increase in its price will increase production costs. Consequently, there would be a fall in short-run aggregate supply as shown in the diagram below. Figure 2 AD and SRAS1 are the aggregate demand and short-run aggregate supply curves respectively. A rise in cost of production shift the SRAS curve to the left that is, to SRAS2 average price increases from P1 to P2. Although inflation benefits sellers in terms of increased revenue, on the whole, it has several adverse effects. Some of these include reducing the living standard of especially fixed income earners, such as pensioners and salaried workers. ...read more.

Furthermore, it may serve to worsen the unemployment problem and might also through down the economic growth in the long run. Government could also use the supply side policies. These are policies that are used by government to increase the supply potential of the economy. For example, the government could abolish minimum wage laws. This would make it cheap to employ workers but would also reduce total cost of production. Its disadvantage is that workers are bound to be exploited by their employers. In conclusion, government of Uganda should put in place a mechanism to prevent future shortage of food by operating buffer stock schemes. And although such schemes have problem, such as cost of shortage, but their existence helps to ease shortages of foodstuffs caused by unpredictable climate changes. After all, 'prevention is better than cure'. This is important also because the government of Uganda has no control over the international crude oil prices. ...read more.