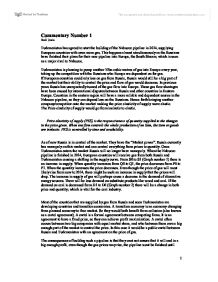 Commentary Number 1 Emil Ursin Turkmenistan has agreed to start the building of the Nabucco pipeline in 2014, supplying European countries with even more gas. This happens almost simultaneously as the Russians have finished their plans for their new pipeline into Europe, the South Stream, which is seen as a major rival to Nabucco. Turkmenistan is planning to pump another 31bn cubic metres of gas into Europe every year, taking up the competition with the Russians who Europe are dependent on for gas. If European countries could rely less on gas from Russia, Russia would still be a big part of the market but their ability to control the price and flow of gas would decrease. ...read more.

Russia currently has monopoly on this market and can control everything from prices to quantity. Once Turkmenistan enters the market Russia will no longer have monopoly. When the Nabucco pipeline is finished in 2014, European countries will receive gas from both Russia and Turkmenistan causing a shifting in the supply curve. From S0 to S1 (Graph number 1) there is an increase in supply. When quantity increases from Q0 to Q1, the price decreases from P0 to P1. When the quantity increases the price decreases. Even though the price of gas will most likely rise from now to 2014, there might be such an increase in supply that the prices will drop. The increase in supply of gas will perhaps cause a decrease in the demand of alternative energy sources. ...read more.

In this case it would be a public cartel between Russia and Turkmenistan with an agreement on the price of gas. The consequences of building such a pipeline is that they cant not ensure that it will end in a big enough profit, even though the gas prices may rise, the pipeline wont be finished until 2014. Turkmenistan can't know for sure that the countries they already are transporting to will have an increased demand for gas. If they end up in a competition with Russia to sell the gas to Europe the price may decrease so much that they could have earned more selling to Asian countries instead. By 2014 the market can have changed a lot, other companies and countries may have initiated plans to start transporting gas into Europe, causing a larger competitive market. Graph Number 1 Graph Number 2 Word count: 669 ?? ?? ?? ?? 1 ...read more.