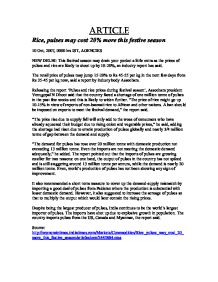 ARTICLE Rice, pulses may cost 20% more this festive season 10 Oct, 2007, 0000 hrs IST, AGENCIES NEW DELHI: This festival season may drain your pocket a little extra as the prices of pulses and rice are likely to shoot up by 10-20%, an industry report has said. The retail price of pulses may jump 15-20% to Rs 45-55 per kg in the next few days from Rs 35-45 per kg now, said a report by industy body Assocham. Releasing the report 'Pulses and rice prices during festival season', Assocham president Venugopal N Dhoot said that the country faced a shortage of one million tonne of pulses in the past few weeks and this is likely to widen further. "The price of rice might go up 10-15% in view of exports of non-basmati rice to African and other nations. A ban should be imposed on exports to meet the festival demand," the report said. "The price rise due to supply fall will only add to the woes of consumers who have already squeezed their budget due to rising onion and vegetable prices," he said, adding ...read more.

This might discourage them to purchase the same amount for a higher price that they did earlier for a lesser price. There is a possibility of consumers decreasing their consumption of rice and pulses marginally. Producers: The producers of pulses and rice would earn abnormal (greater) profits because of the rise in price but gradually in the long run because of various measures taken by the government, they would again start earning normal profits. Government: Immediate measures would have to be taken to stop the prices to rise further. The government would have to tackle this situation taking into consideration both the producers as well as the consumers. Other countries: US, Canada, Myanmar and Pakistan would also be affected by this price rise and deficient supply. They might consider this as an opportunity and might increase the prices of rice and pulses imported to India marginally. If this happens then Indian market of pulses and rice would get affected. The only advantage of this situation would be that this would act as a warning for the future thus awaking the Indian Government to take precautions for any such situations that might occur in the future. ...read more.