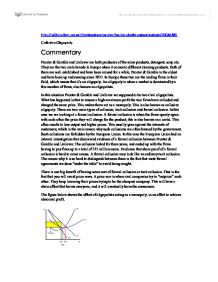 http://e24.no/lov-og-rett/vaskegiganter-straffes-for-ulovlig-prissamarbeid/20046385 Collusive Oligopoly. Commentary Procter & Gamble and Unilever are both producers of the same products, detergent, soap etc. They are the two main brands in Europe when it comes to different cleaning products. Both of them are well established and have been around for a while, Procter & Gamble is the oldest and have been up and running since 1837. In Europe these two are the leading firms in their field, which means that it's an oligopoly. An oligopoly is when a market is dominated by a few number of firms, also known as oligopolists. In this situation Procter & Gamble and Unilever are supposed to be two rival oligopolists. ...read more.

Such collusions are forbidden by the European Union. In this case the European Union had an internal investigation that discovered evidence of a formal collusion between Procter & Gamble and Unilever. The collusion lasted for three years, and ended up with the firms having to pay fines up to a total of 315 million euros. Evidence that show proof of a formal collusion is hard to come across. A formal collusion may look like an ordinary tacit collusion. The reason why it is so hard to distinguish between them is the fact that most formal agreements are done "under the table" to avoid being caught. ...read more.

The kinked demand curve was first introduced by economist Paul Sweezy in the 1930s, his thoughts were that the regular demand curve did not apply to different oligopolies and perfect monopolistic competition. It gives a realistic picture of what the market would have looked like. Being a part of both a formal and tacit collusive oligopoly is strictly illegal and will end in big fines and other punishments. Procter & Gamble and Unilever are the only big producers of their products in Europe, so even if this ruins their reputation the consumers are not left with many alternative products. The prices will most likely start to fall after a while as the competition tightens. Both firms agreed to pay the fines and put and end to collusive oligopoly. ...read more.