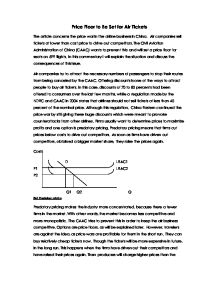 Price Floor to Be Set for Air Tickets The article concerns the price war in the airline business in China. Air companies sell tickets at lower than cost price to drive out competitors. The Civil Aviation Administration of China (CAAC) wants to prevent this and will set a price floor for seats on 699 flights. In this commentary I will explain the situation and discuss the consequences of this issue. Air companies try to attract the necessary numbers of passengers to stop their routes from being canceled by the CAAC. Offering discounts is one of the ways to attract people to buy air tickets. In this case, discounts of 70 to 80 percents had been offered to consumers over the last few months, while a regulation made by the NDRC and CAAC in 2004 states that airlines should not sell tickets at less than 45 percent of the nominal price. ...read more.

However, travelers are against the idea, as price wars are profitable for them in the short run. They can buy relatively cheap tickets now. Though the tickets will be more expensive in future, in the long run. This happens when the firms have driven out their competitors and have raised their prices again. Then producers will charge higher prices than the normal price and the consumers would therefore be worse off. Although this predatory pricing , also rumors about government intervention made consumers already unhappy. Some insiders have implied that China Eastern used funds injected by the government to subsidize its losses on ticket sales. The reaction of the CAAC was that the government had injected several billion yuan into China Eastern to maintain its daily operations, but not so it could cut ticket prices. ...read more.

This will lead to a shift in supply and to less excess supply in the long run as shown in figure 2. Secondly there is a problem with unemployment. By implementing a price floor, unemployment will occur. This is because the supply will shift to left in the long run. There are fewer suppliers and therefore people will get unemployed. People who were working in the area Qd-Q0 will lose their jobs. On the other hand, people who are working in the area 0-Qd will keep their jobs and will gain more. Consumers are obviously not happy with this and some people reacted with statements as, 'We don't want to pay extra just to fund some senior manager's salary', as mentioned in the article. Predatory pricing is a difficult task to prevent, since price floors do not benefit consumers neither in the short run nor in the long run. The CAAC probably needs to find other regulations and restrictions manners to prevent this 'malicious competition'. ...read more.