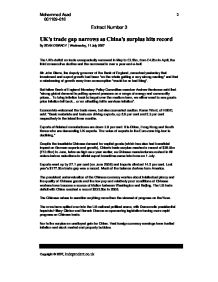 Extract Number 3 UK's trade gap narrows as China's surplus hits record By SEAN O'GRADY | Wednesday, 11 July 2007 The UK's deficit on trade unexpectedly narrowed in May to �3.5bn, from �4.2bn in April, the third consecutive decline and the narrowest in over a year-and-a-half. Sir John Gieve, the deputy governor of the Bank of England, remarked yesterday that investment and export growth had been "on the whole getting a very strong reading" and that a rebalancing of growth away from consumption "would be no bad thing". But fellow Bank of England Monetary Policy Committee member Andrew Sentance said that "strong global demand is putting upward pressure on a range of energy and commodity prices... To bring inflation back to target over the medium term, we either need to see goods price inflation fall back... or an offsetting fall in services inflation". Economists welcomed the trade news, but also counseled caution. Karen Ward, of HSBC, said: "Basic materials and fuels are driving exports, up 5.6 per cent and 2.3 per cent respectively in the latest three months. ...read more.

To maintain that the value of the Yuan is low, China uses massive amounts of its currency to purchase foreign currencies, such as the dollar, and recently, the pound. When China uses the Yuan to buy these foreign currencies, such as the pound in this case, the demand for the pound and the supply of the Chinese Yuan will both increase. This is illustrated in both FIGURE 1 and FIGURE 2 below. A trade surplus1 in the Chinese economy leads to an increase in the demand for the Yuan, causing the demand curve to shift to the right from Dy1 to Dy2 (FIGURE 1). This shift in the demand will eventually cause an increase in the exchange rate2 for the Yuan to P2. Consequently, an increase demand for the Yuan means that the supply of the currencies of china's trading partners will increase ---> a shift in the supply curve from S1 to S2 presented in FIGURE 2. "It is China, Hong Kong and South Korea who are demanding UK exports". Despite the insatiable Chinese demand for capital goods, china's trade surplus reached a record of $26.9bn in June, twice as high as a year earlier because of the incentives that are given to Chinese manufacturers to increase exports. ...read more.

As a result of all this, import expenditure will decrease from the region between Q1 and Q4 to the region between Q2 and Q3 (M), improving the trade balance. The low value of the Yuan means that foreigners (e.g. US and UK) have to use less of their own home currency to buy Chinese exports. Increasing the value of the Yuan would cause Chinese goods to become relatively more expensive for foreigners, who might then switch to domestic goods and/or imports from other countries, therefore reducing the trade gap5. On the other hand, imposing tariffs on Chinese goods is more likely to worsen the trade deficit. The imposition of the tariffs will damage the Chinese economy and therefore reduce china's ability to buy the United Kingdoms exports. Basically, there is a trade off6 for every attempt done to improve the economic situation. ___________________________________________________________________ 4 A tax levied on imports to increase the competitiveness of domestic goods. 5 The difference in value over a period of time of a country's imports and exports of merchandise (Balance of Trade). 6 The Lose of one quality or aspect of something in return for gaining another quality or aspect. ?? ?? ?? ?? 2 Mohammad Asad 001109-018 ...read more.