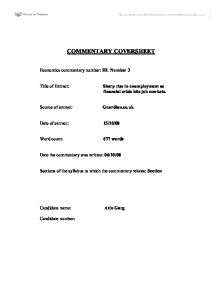 COMMENTARY COVERSHEET Economics commentary number: HL Number 3 Title of Extract: Sharp rise in unemployment as financial crisis hits job markets. Source of extract: Guardian.co.uk Date of extract: 15/10/08 Word count: 677 words Date the commentary was written: 06/10/08 Sections of the syllabus to which the commentary relates: Section Candidate name: Atin Garg Candidate number: Commentary Extract Sharp rise in unemployment as financial crisis hits jobs market British unemployment today posted its biggest rise since the country's last recession 17 years ago as the financial crisis filtered through to the jobs market. Official figures showed unemployment measured by International Labour Organisation (ILO) standards rose by 164,000 in the three months to August from the previous quarter to stand at 1.79 million. The rise took the jobless rate up half a percentage point to 5.7%, also the biggest jump since July 1991. "These numbers are truly horrendous and much worse than I had feared," said David Blanchflower, a labour market expert and member of the Bank of England's monetary policy committee. He told guardian.co.uk his earlier prediction that unemployment would rise to 2 million by Christmas now looked conservative. "Unemployment will be above 2 million by Christmas. I am particularly worried at the 56,000 rise in the number of young unemployed people. ...read more.

These numbers are falling off a cliff." In a sign that consumer price inflation - now at a 16-year high of 5.2% - is not feeding into wages, annual average earnings growth slowed to 3.4% in the three months to August, its weakest in five years. "As for pay pressures, the average earnings numbers remain very subdued," said Philip Shaw, the chief economist at Investec. "The labour market appears yet again not to be an inflationary threat to the economy which helps to justify the cut in interest rates last week." Economists believe it is going to get worse. Thousands of jobs are being lost in the City, where banks have merged or collapsed, and on the high street, where growing numbers of retailers are going bust. Manufacturers laid off 46,000 workers in the three months to August, taking the total number of manufacturing jobs to 2.87million, today's figures from the Office for National Statistics showed. Job losses are spread across the economy, with Cadbury announcing 580 job cuts this week and ITV cutting about 1,000 jobs. The Centre for Economics and Business Research estimates 62,000 financial jobs will be lost by the end of next year. Nigel Meager, the director of the Institute for Employment Studies, said: "No part of the country is spared. ...read more.

But nevertheless, the British government will find the goal of full employment difficult to achieve. This would be to reasons such as the unavoidable occurrence of inflation when trying to reduce demand-deficient unemployment. The limitations of using Fiscal policies to raise the Aggregate demand would also hinder the act towards attaining full employment. Examples of these would be time-lags and the crowding out effect. The short-term impacts of this situation would include reduction in the government expenditure, arising due to more money being provided as unemployment benefits and also due to less tax revenue being received by them. Another short-term effect would be the opportunity cost arising in terms of output foregone and the indisputable inefficiency. The long-term impacts of this sudden unemployment include the individual and social costs born primarily by the unskilled and lowly-paid workers. These workers will certainly find it difficult to look for suitable jobs in the future. Even the impact on poverty and income distribution is enormous, due to a large majority of workers within the primary sector being made redundant. In Britain, for example, a majority of the real estate workers are being dismissed. Thus there has stemmed an unequal impact of unemployment in terms of region, urban/rural, gender, race and age. This could be particularly hazardous for in determining the racial distribution of Britain. ...read more.