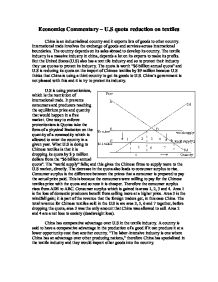 Economics Commentary - U.S quota reduction on textiles China is an industrialized country and it exports lots of goods to other country. International trade involves the exchange of goods and services across international boundaries. The country depends on its sales abroad to develop its country. The textile industry is a massive industry in china, depends a lot on its exports to make its profits. But the United States (U.S) also has a text tile industry and so to protect their industry they use quotas to protect its industry. The quota is worth "$6 billion annual quota" and U.S is reducing its quota on the import of Chinese textiles by $9 million because U.S thinks that China is using a third country to get its goods to U.S. ...read more.

This is because the consumers were willing to pay for the Chinese textiles price with the quota and so now it is cheaper. Therefore the consumer surplus rises from ADE to ABC. Consumer surplus which is gained is areas 1, 2, 3 and 4. Area 1 is the loss of domestic producers benefit from selling more at a higher price. Area 3 is the windfall gain; it is part of the revenue that the foreign traders get, in this case China. The total revenue for Chinese textiles sold in the U.S is are area 3, 5, 6 and 7 together, before dropping the quota, area 3 was the only amount that China was allowed to sell. Area 2 and 4 are a net loss to society (deadweight loss). ...read more.

Another reason for China not liking the actions taken by U.S is because "china hopes anticipated gains in the textile industry will offset huge losses in employment capacity in other economic sectors." China wants all of its industry to grow at the same time and equally, and so this reduced quota will harm their industries, this is why China takes this matter very seriously. China does not like what U.S has done to their textile industry as this might break trade relations, and this may well be loses for both sides. Their relation would get worse, and then China would retaliate as they want to protect its industry and this would lead to more problems. As exports represent an injection into the circular flow of income and are subjected to the multiplier effect. And also unemployment would rise in other industry within China, and even some firms in U.S, as they might not be able to compete with the Chinese industries. Multiplyer effect ...read more.