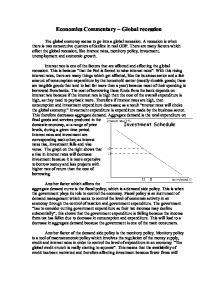 Another reaction of this global slowdown is unemployment. Unemployment is present in the economy when there are workers who are able and willing to work but who do not have jobs. There are many costs of unemployment, because it affects the human being and the people around him; as his/her standard of living falls, loss of self-esteem, loss of skills, marriage break-up, higher crime rate and the opportunity cost of the goods and service which could be produced if these people were employed. The global recession is correspondent to unemployment by "the demand-deficient (cyclical) unemployment". This is when there is a fall in aggregate demand of all goods and services and hence for labour. From the graph we can se that AD1 shifts inwards to AD2., but from the Keynesians point of view, wages will not go down as they are "sticky downwards" and therefore the labour market does not clear which results in demand deficient unemployment of "y - x" ...read more.