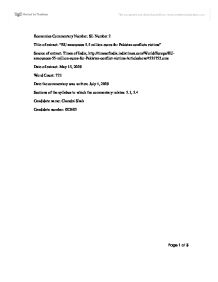 Economics Commentary Number: SL Number 2 Title of extract: "EU announces 5.5 million euros for Pakistan conflicts victims" Source of extract: Times of India; http://timesofindia.indiatimes.com/World/Europe/EU-announces-55-million-euros-for-Pakistan-conflict-victims-/articleshow/4531752.cms Date of extract: May 15, 2009 Word Count: 721 Date the commentary was written: July 4, 2009 Sections of the syllabus to which the commentary relates: 5.1, 5.4 Candidate name: Chandni Shah Candidate number: 002605 Printed from EU announces 5.5 million euros for Pakistan conflict victims 15 May 2009, 0040 hrs IST, AFP BRUSSELS: The European Commission on Thursday announced 5.5 million euros (7.5 million dollars) of emergency humanitarian aid for hundreds of thousands of civilians in conflict-ridden northwest Pakistan. More than 834,000 civilians have now fled a military assault on Taliban fighters holed up in Pakistan's rugged northwest, where artillery pounded rebel bastions Thursday. "As a result of the intensified fighting in Swat and other parts of the country, Pakistan is facing not only a security threat but also a humanitarian threat," said European Humanitarian Aid Commissioner Louis Michel. "Pakistani authorities are doing their utmost but their relief capacities are now overstretched," he said, announcing the release of 5.5 million euros while adding that more could be provided "if necessary." ...read more.

Many parts of Pakistan had been taken over by terrorists, Taliban, which resulted in some citizens to move to the northern part of the country. The EU is providing �5.5 million and more "if necessary." It will be used for basic necessities of life, food, shelter, and clothing; medical support, sanitation, and drinking water would also be provided. The type of which is provided by the EU is an official aid or also known as official development assistance (ODA); it is a mix of bilateral and multilateral aid. Multilateral aid is when organizations allocate funds provided by the countries and bilateral aid is when the aid is given directly to the country in need in the form of for example money support, machinery, tools, food, and medicine. In order to develop, Pakistan needs money and the EU is supplying them with the official aid through the organization of the Red Cross. This aid will result in developing not just the basic needs of the people there, which is proper sanitation and basic necessities of life, but also help strengthen the government, the "civilian government." ...read more.

Infrastructure "provides the basis for an economy." It includes things such as road networks, sewage system, health, education. Enhancing the infrastructure would make the people in the economy better and more advanced labor. Education would help increase the amount of skilled labor which would, again, help develop the economy by helping increase the amount of physical capital and technological factors; these are social benefits to the economy. Better health would result in longer life span, more productivity and an increase in literacy rate would provide the economy with better skilled workers, increase productivity, and awareness. Poor sanitation, sewage system, can result in many deaths, which would be a negative impact on the economy as there will be a decrease in labor. In conclusion, the official aid given to Pakistan will help the economy towards progression. I will help by improving the economy's human and institutional factors. By improving the "civilian government," it would also make it a safer place for the normal citizens especially from the terrorist attacks. There will also be an impact on the law and order in the economy of Pakistan due to the aid given. The political stability can also improve. These would result in the overall development of the economy. ?? ?? ?? ?? Page 1 of 5 ...read more.