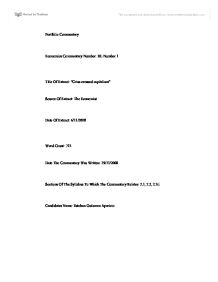 Portfolio Commentary Economics Commentary Number: HL Number 1 Title Of Extract: "Criss-crossed capitalism" Source Of Extract: The Economist Date Of Extract: 6/11/2008 Word Count: 713 Date The Commentary Was Written: 19/11/2008 Sections Of The Syllabus To Which The Commentary Relates: 2.1, 2.2, 2.3ii Candidates Name: Esteban Gutierrez Aparicio The collusive1 market structure that the Japanese traditional industry has traced over previous years has increasingly become to fail. The tendency of companies abandoning cross-shareholdings2 has generated a in deep economic loss resulting from a reduce in the total revenue of corporations in the country. The attempt of industries such as steel, paper and energy as well as car making companies and electronic firms3 to consolidate economic partnership through means of oligopoly, has decreased deliberately from 50% of the market values to 20% over the last 17 years. ...read more.

As the extract mentions, there is a bought share between companies to prevent the overhaul of others and to regulate the number of firms within the market as it happened with Mitsubishi when 11 other companies had an acquisition of shares to "block the outsider". As these companies were subdued to price controls of the industry, the demand curve will therefore be highly inelastic responding to the few amount of substitutes5 that the industry seeks to have in flow. However the concerns about the crumbling of the traditional tendency of cross-shareholding are given with the results in the change of behavior of the industry. Along with the abandonment of share holding companies, the industry becomes vulnerable to external entry and in the case of Japan foreign investments which increases competition. ...read more.

Quantity produced also lessens from Q1 to Q2 as costs of production are directly proportional to the loss of profit6 with the diminishing prices. Due to price decline, total revenue also decreases as both quantity and price of products decrease considerately. The impacts of this phenomenon on Japanese economy is illustrated with losses of the questioned firms. Between March and September more than 160 shareholding companies lost a total of �300 billion in value. 610 Banks and monetary institutions have also been affected as these companies are part of the essential capital they lend against. Despite the increase in cross-shareholding companies since 2004, the evident economic impact of the "criss-crossed capitalism" are starting to arise. The Japanese government in response has been working on regulatory measures to prevent this phenomenon future repercussions. ...read more.