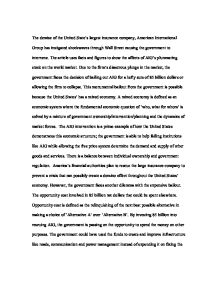 The demise of the United State's largest insurance company, American International Group has instigated shockwaves through Wall Street causing the government to intervene. The article uses facts and figures to show the affects of AIG's plummeting stock on the world market. Due to the firm's disastrous plunge in the market, the government faces the decision of bailing out AIG for a hefty sum of 85 billion dollars or allowing the firm to collapse. This monumental bailout from the government is possible because the United States' has a mixed economy. A mixed economy is defined as an economic system where the fundamental economic question of 'who, what for whom' is solved by a mixture of government ownership/intervention/planning and the dynamics of market forces. The AIG intervention is a prime example of how the United States demonstrates this economic structure; the government is able to help failing institutions like AIG while allowing the free price system determine the demand and supply of other goods and services. There is a balance between individual ownership and government regulation. America's financial authorities plan to rescue the large insurance company to prevent a crisis that can possibly create a domino effect throughout the United States' economy. ...read more.

In order for the rescue plan to work, it would call for the government to take possession of 80 percent of AIG and to remove its management. This would mean that the majority of the company would be under public ownership and the government would become the new management. Public ownership is broadly defined as the government- funded provision of goods and services. Tax dollars are paying for the bailout plan hence it becomes part of a public sector. The government would control 80 percent of the company which in turn means that the public owns 80 percent of the company. If AIG were bought out, then it would essentially become public property like a school, park or library. Overall, the government's predicament with AIG has exemplified a few of the fundamental economic concepts. Businesses, institutions and organizations alike use economic concepts to make the best decision for their establishment which also leads to what is best for the country. US bid to rescue leading insurer Wed Sep 17 01:10:43 UTC 2008 AIG shares fell 70% in early trading on Tuesday, later closing 21% down Efforts are under way in the US to try to save AIG, the country's biggest insurance company, from bankruptcy. ...read more.

Credit ratings agencies, which assess the riskiness of debt, have downgraded AIG - making it more difficult for the firm to borrow money. The collapse of AIG would mean that many banks and investment funds in the US and around the world would lose their insurance cover at a time when defaults on payments are likely to rise. Meanwhile, the Fed has left interest rates unchanged at 2%. The BBC's Matthew Price in New York said the bank had clearly decided an interest rate cut would not help to alleviate the short-term financial crisis. On Wall Street, the Dow Jones rallied on Tuesday, closing 141 points higher having on Monday suffered its worst day's trading since the September 2001 attacks on the US. But leading indices across Europe and Asia ended lower, with banking shares being the worst hit. Shares in Britain's biggest savings group, HBOS, initially dropped 35% before closing 22% down. Central banks around the world responded by carrying out emergency measures to keep markets liquid. The Bank Of England and the Bank of Japan injected �20bn (25bn euros; $36bn) and 2.5 trillion yen ($24.1bn; �13bn) respectively into their money markets. The extra funding came as the interest rates at which banks lend to each other rocketed - as they did at the start of the credit crunch. ...read more.