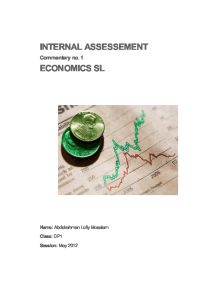 INTERNAL ASSESSEMENT Commentary no. 1 ECONOMICS SL Name: Abdelrahman Lofty Mosalam Class: DP1 Session: May 2012 China set to introduce new rules on smoking in public China's economy is known as one of the strongest economies in the world, as they achieved a very high recorded rate of growth domestic product in 2010 with 10.3%, as well as china is one of the main exporters worldwide, all of these are reasons why China has a powerful role in the world economy. But unfortunately this power could be in dangerous if the economy faces market failure. Market failure occurs when there is a misallocation of resources according to the price mechanism towards the social optimal way caused by the failure of the market signal function to identify the efficient and exact outcomes (Mankiw, 2011). Which consequence externalities, In our market failure case, there is something called negative externality, which means that the third party, who are neither the consumer nor the producer, they are the society, known as the marginal social (MSb/c). This good produced is harmfully or damagingly affecting the society. Therefore there is misallocation of resources. ...read more.

They can either put legislations by law to limit the quantity produced by the supplier for example for this particular good, or by banning, ban the production or consumption of a certain good that causes a negative externality, or may be by advertising to influence producers and consumers and warn. or finally by taxation, the act to put a high tax on demerit goods, which is the very known and traditional way of lowering the consumption of a good having negative externalities (Mankiw, 2011), Also the tradable permits, which could be a solution in other situations, but it may have a relation to the Chinese one, as we know the production of cigarettes is surely harming the environment so that they can use the tradable permits to minimize the supply of cigarettes. All of these are ways for the government to attempt to correct market failure by influencing both supply and demand for goods. This is exactly the situation in China, cigarettes has a negative impact generally and increasing day after day its negative effects on the society, thus the government decided to make new strict rules to ...read more.

For the reason that foreign companies come to china to produce their cigarettes because "The cost of a packet of cigarettes is significantly lower in China than in many western countries". The solution which may help the Chinese government to interfere and either to correct the market failure economically if happens or socially to help the society to maintain good health and social wellbeing (Arnold, 2007), is actually the taxation by increasing very high percentage of tax {figure B}, after putting in consideration all of the limitations, the use of taxation is the ideal solution. To conclude, we can say that the government has to keep the market under surveillance because the market is left totally free, surely will appear overproduction of goods having negative externalities as demerit goods, as cigarettes or goods that passes from steps in production that pollute the environment, causing circumstances as spreading different diseases and danger for all living organisms which leads socially to high death rate and economically on the long term to economical crisis. Therefore, government has to interfere, to limit the extent of demerit goods on the free market, to insure a safe future both economically and socially. ...read more.