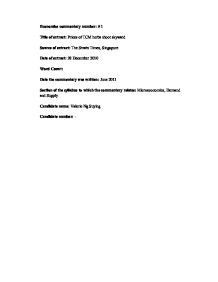 Economics commentary number: # 1 Title of extract: Prices of TCM herbs shoot skyward Source of extract: The Straits Times, Singapore Date of extract: 28 December 2010 Word Count: Date the commentary was written: June 2011 Section of the syllabus to which the commentary relates: Microeconomics, Demand and Supply Candidate name: Valerie Ng Suying Candidate number: - This article, enlightening the effects of an increasing price in traditional Chinese medicine (TCM), is an example of how the hidden forces of supply and demand affects the economy and thereby balance out the market to find its equilibrium. Prices of most herbs used in traditional Chinese medicine (TCM) in Singapore have risen by at least 20% in the past year. This is attributed to the strengthening of the Chinese yuan and two recent natural disasters in China, resulting in ruined crops and a decrease in supply. Rapid urbanization and possible hoarding and speculation by traders are other factors affecting prices of TCM herbs. Great concerns about the natural disasters and strengthening of the Chinese yuan have led to a significant decrease in the supply of TCM herbs, as highlighted in the article - "supply shortages are the result of ruined crops in the aftermath of two major natural disasters in China". ...read more.

At new equilibrium, the new price P1 is higher than the original price P0 while the new quantity demanded and supplied has fallen from Q0 to Q2. Figure 1 The extent in which the price increases and the quantity decreases depends on the extent of shift of the supply curve as well as the elasticity of demand. As seen in Figure 1, there is a disproportionate surge in price relative to the decrease in TCM herbs supply. This is due to the inelastic nature of the price elasticity of demand (PED) of TCM herbs, which, suggests that an increase in price leads to a smaller decrease in quantity demanded. The PED of herbs is inelastic as there is a lack of availability of substitutes for Chinese medicine. Chinese herbs cannot be substituted for western medicine due to the consumers' confidence in Chinese medicine. Hence, an immediate increase in herb prices due to natural disasters will not cause significant decreases in demand, thus causing a major increase in herb prices from P0 to P2. Another mentioned cause of the increase in TCM herb prices is speculation that "there is little chance of price correction [due to the natural disasters]". ...read more.