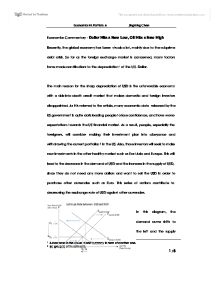 Economics Commentary - Dollar Hits a New Low, Oil Hits a New High Recently, the global economy has been struck a lot, mainly due to the subprime debt crisis. So far as the foreign exchange market is concerned, many factors have made contributions to the depreciation1 of the U.S. Dollar. The main reason for the sharp depreciation of USD is the unfavorable economy with a sick-into-death credit market that makes domestic and foreign investors disappointed. As it is referred to the article, many economic data released by the US government is quite dark leading people to lose confidence, and have worse expectations towards the US financial market. As a result, people, especially the foreigners, will consider making their investment plan into abeyance and withdrawing the current portfolios2 in the US. Also, those investors will seek to make new investments in the other healthy market such as East Asia and Europe. This will lead to the decrease in the demand of USD and the increase in the supply of USD, since they do not need any more dollars and want to sell the USD in order to purchase other currencies such as Euro. This series of actions contribute to decreasing the exchange rate of USD against other currencies. In this diagram, the demand curve shifts to the left and the supply curve shifts to the right, giving a sharp decrease in the price of USD from p1 to p2. ...read more.

instead of a bulk of money during the special period like this subprime crisis. This will lead a shift in the demand of the dollar-priced commodities such as the crude oil to the right, giving an increase in the price of the commodities. This news article also refers to the China's exchange rate system. Although Chinese government has changed their exchange rate system from Fixed Exchange Rate to Managed Exchange Rate getting appreciation due to the outside pressure, the Europeans don't satisfied with this replacement and still think Yuan is undervalued that affords advantages to China's export. This is because the price of the goods in the country with an undervalued currency will be more attractive to the other countries. Extract: FRANKFURT, Oct. 18 - The dollar sank to a new low against the euro Thursday as fresh evidence of losses in the mortgage industry stoked fears of a sharper-than-expected economic slowdown in the United States and crude oil rose to another record. In late afternoon trading in New York, the euro traded at $1.4294, up from $1.4186 on Wednesday. Crude oil for November delivery rose $2.07, or 2.4 percent, to $89.47 a barrel. In after-hours electronic trading, the price rose slightly above $90. The declining dollar has made commodities, which are priced in dollars, more attractive as investments, while tensions between Turks and Kurds over border violence in northern Iraq have helped keep oil prices rising. ...read more.

BusinessEurope called on the Group of 7 finance ministers and central bankers to find solutions "within the sphere of multilateral consultations, and notably with clear commitments in the G-7." The letter was also signed by the heads of business lobbies in Germany, France and Italy. "Persistent disequilibria in the world economy continue to harbor the danger of further appreciation of European currencies in the face of large external deficits in the U.S. and inflexible currency regimes in other parts of the world," they wrote. The comment alluded to the enormous United States current account deficit, whose sheer size has left currency markets vulnerable to jitters that foreigners would tire of lending the cash required to cover the shortfall, a reflection of how much more Americans spend than they save. It also referred to China's foreign exchange management, which has kept the yuan low against the dollar. 1 A decrease in the value of one currency in term of another one. 2 (a) group(s) of investments. 3 Interest (or the interest rate) is the price of money (a currency). 4 Arbitrage in the Forex market is a type of action that traders borrow and sell currencies whose interest rates are quite low, and then buy the other currencies with higher interest rate so that they can get returns from the difference between the interest rate. 5 The difference between a nation's total exports of goods, services and transfers, and its total imports of them. ?? ?? ?? ?? Economics HL Portfolio A Jingming Chen 1 / 8 ...read more.