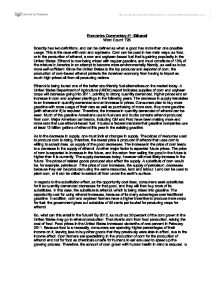 Economics Commentary #1: Ethanol Word Count: 728 Scarcity has two definitions, and can be defined as when a good has more than one possible usage. This is the case with corn and soybeans. Corn can be used in two main ways; as food, or in the production of ethanol, a corn and soybean-based fuel that is gaining popularity in the United States. Ethanol is now being mixed with regular gasoline, and must constitute of 10% of the mixture in America in an attempt to become more environmentally friendly, as well as to be more self-sufficient. Since the United States is the top producer and exporter of corn, the production of corn-based ethanol protects the American economy from having to import as much high-priced oil from oil-producing nations. ...read more.

That diverts corn from food production, raising the cost of food. Food prices in the United States increased six-tenths of one percent in February 2011. Because food is a necessity, consumers are spending higher percentages of their income on it, leaving less to buy other goods that they previously were able to afford, due to the income effect. Corn farmers are specializing in the production of corn for the production of ethanol and not for food as chemicals unsafe for humans to eat are used to speed up the growing process. Therefore, the amount of corn grown with human health in mind is reduced. Is ethanol a good idea, or will it raise food prices, the price of corn and eventually the price of fuel itself? We will see in the future, however, at this point, the production of ethanol is a booming industry. http://economics.about.com/cs/studentresources/a/micro_help.htm http://www.agriview.com/articles/2010/12/16/crop_news/crops03.txt http://www.ehow.com/how_2095469_make-ethanol.html http://www.theoildrum.com/node/3591 ...read more.