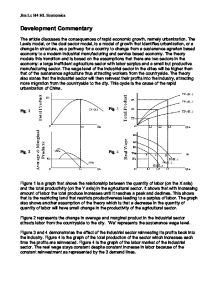 Economics commentary - In the article, it mentioned that Chinas economic wonder was largely attributed to the Cheap and sufficient migrant laborers.

Development Commentary The article discusses the consequences of rapid economic growth, namely urbanization. The Lewis model, or the dual sector model, is a model of growth that identifies urbanization, or a change in structure, as a pathway for a country to change from a sustenance agrarian based economy to a modern industrial manufacturing and service based economy. The theory models this transition and is based on the assumptions that there are two sectors in the economy: a large inefficient agriculture sector with labor surplus and a small but productive manufacturing sector. The wage level of the industrial sector in the cities will be higher than that of the sustenance agriculture thus attracting workers from the countryside. The theory also states that the industrial sector will then reinvest their profits into the industry, attracting more migration from the countryside to the city. This cycle is the cause of the rapid urbanization of China. Figure 1 is a graph that shows the relationship between the quantity of labor (on the X axis) ...read more.

In the article, it mentioned that China's "economic wonder" was largely attributed to the "Cheap and sufficient" migrant laborers. http://en.wikipedia.org/wiki/Dual-sector_model http://welkerswikinomics.com/blog/2008/02/26/models-for-economic-growth-ib-economics/ Urban society coming too soon for China Updated: 2011-10-12 08:00 By Shan Juan and Huo Yan (China Daily) NANNING - China may not be ready for a society dominated by cities, experts warned onTuesday, citing the country's quick urbanization. Nearly half of China's population works and lives in urban areas, said senior researcher ZhengZhenzhen on Tuesday. But it's not real urbanization as most of the migrants, particularly those from the countryside,still find it hard to integrate into urban life and be treated fairly, said the expert with the ChineseAcademy of Social Sciences at the China-ASEAN Forum on Population and FamilyDevelopment. Despite the nation's economic wonder realized largely by cheap and sufficient labor, "destination cities are still struggling to assure migrant workers of basic supports like affordableand decent housing, fair provision of public services in healthcare, education, old age care,and community management," said Zhang Chunsheng, a senior official of the NationalPopulation and Family Planning Commission. ...read more.

Lu Jiehua, a sociology professor at Peking University, said when the government speaks aboutthe migrant population, it mainly concerns itself with social security and stability. "A huge gap in public service access between local urbanites and migrants made migrantsseriously marginalized and posed a challenge for social stability," he explained. Like the 2005 Paris riots mainly involving the second generation of discontented immigrants, "we are now more concerned about China's younger generation of migrant workers who wereimmersed with city culture but maintained a status of farmers," he said. Tewodros Melesse, director general of the International Planned Parenthood Federation, saidthe migrant population played important roles in boosting the country's economy and should betreated fairly and equally. To recognize that, the government began to issue human-centered measures and policiesproviding rural migrant workers access to basic public services like medical care in cities, saidCui Li, deputy chief of the National Population and Family Planning Commission. Huang Zhaohua contributed to this story. China Daily ?? ?? ?? ?? Jim Lu H4 HL Economics ...read more.