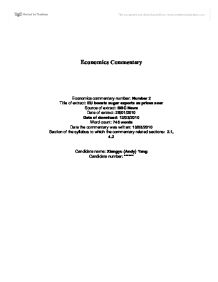 Economics Commentary Economics commentary number: Number 2 Title of extract: EU boosts sugar exports as prices soar Source of extract: BBC News Date of extract: 28/01/2010 Date of download: 12/03/2010 Word count: 745 words Date the commentary was written: 13/03/2010 Section of the syllabus to which the commentary related sections: 2.1, 4.2 Candidate name: Xiangyu (Andy) Yang Candidate number: ****** In the news article, the European Union (EU) claimed that European Beet farmers have surpluses. That suggested that the beet has been a good crop and supply of beet in European market is too much. Consequently, the domestic sugar producers in EU would produce much more sugar and increase the sugar supply in the domestic market. The large amount surpluses of sugar will be occurred. In Figure 1, the equilibrium1 quantity of sugar in European market should be Q, and market clearing price is P. ...read more.

This will benefit the consumers in poorer countries. 1 The equilibrium situation for a market can be shown graphically as the point of intersection of the graphs of the demand and supply schedules. At the equilibrium price all buyers are satisfied and there is no excess supply. 2 Subsidy is the direct payment for production or indirect production incentives such as tax breaks or low-interest loans which the domestic producers receive from the government. A subsidy lowers the costs for domestic producers and enables them to be more competitive with foreign producers. 3 WTO is to create a global free trade environment by eliminating trade barriers and facilitating an arena in which to settle disputes. 4 It is a direct payment to domestic producers that operates on the international market. 5 Dumping is a country's firms sell goods below production cost or below the domestic price level on the importing country. ?? ?? ?? ?? Economics Commentary - Number 2 ...read more.