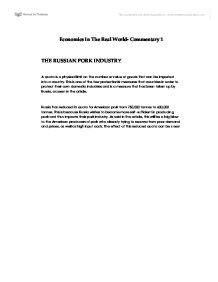 Economics Commentary - Russian Quota on US Pork and Indian Government Tax on cars.

Economics In The Real World- Commentary 1 THE RUSSIAN PORK INDUSTRY A quota is a physical limit on the number or value of goods that can be imported into a country. This is one of the few protectionist measures that countries in order to protect their own domestic industries and is a measure that has been taken up by Russia, as seen in the article. Russia has reduced its quota for American pork from 750,000 tonnes to 600,000 tonnes. This is because Russia wishes to become more self-sufficient in producing pork and thus improve their pork industry. As said in the article, this will be a big blow to the American producers of pork who already trying to recover from poor demand and prices, as well as high input costs. The effect of this reduced quota can be seen in Fig.1 below. As can be seen, the quota has been decreased from QD2-QS2 at a value of 750,000 tonnes to QD3-QS3 at a value of 600,000 tonnes. The deadweight loss (represented by the shaded area) has, as a result, increased from ABC to EBD and this is partly where the problem of quotas lies. The shaded area represents the inefficiency of the domestic producers and by decreasing the number of US exports coming in, they are increasing the reliance on domestic producers who may be more inefficient in comparison to the American producers. ...read more.

Furthermore, the implementation of a tariff is less likely to lead to the creation of a black market. This is because with an import quota there is a chance that there will be massive shortages of pork. Therefore, criminal organisations would see smuggling pork as a lucrative business opportunity. However, with a tariff such shortages are unlikely as it does not set a limit on the number of products imported. That being said, if a tariff is set at an unreasonably high rate then there is still a chance that a black market will open up. Nevertheless either form of protectionism has its disadvantages. Firstly, it leads to less choice for consumers and the lowered competition will see domestic firms become inefficient without any incentive to minimise costs. Moreover, protectionism distorts comparative advantage and this leads to the inefficient use of resources thus leading to reduced specialisation and a reduced potential level of the world's output. Indeed protectionism could potentially damage economic growth. INDIAN CAR TAX Externalities occur when the consumption or production of a good or service has a spill over effect on a third party. If an externality is negative, then this spill over effect is in some way harmful. Therefore there has to be an external cost i.e. one that is borne by a third party, to add to the private costs of the producer or consumer in order to calculate the full cost to society. ...read more.

There are alternatives to congestion fees and taxes, with advertising being an example. The Indian government could fund positive advertising for substitute goods such as public transport or bicycles thus decreasing the consumption of vehicle travel. One of the problems with this solution is that the costs may be high and so taxes would have to be in place. Moreover, people may not care about the effects of vehicle travel and will therefore continue with their current mode of travel. Another solution could be for the government to restrict the number of driving licences. This is effectively a quota that would essentially see a decrease in the number of cars on the road. However, the problem of who to allocate these licences to arise and this could prove unpopular. Another alternative solution could be to heavily advertise public transport. This may reduce the number of cars on the road and would therefore see a reduction in the negative externalities created. However, for this to work, people would have to heed the advertisements advice and as it would not be compulsory, people may neither listen nor care to change their method of transportation. Overall, it looks like the Indian government's decision to implement a car tax and congestion fee is the most viable solution because it is less likely to alienate the citizens of New Delhi when compared to curfews and is also more likely to see a decrease in consumption when compared to advertising. ?? ?? ?? ?? ...read more.